Symbolics Inc. was an American computer company. It was best known for developing and selling Lisp machines - special computers used to run the Lisp programming language - during the 1980s and 1990s.

Following the company's bankruptcy, Symbolics is a privately owned company that manages Symbolics Inc.'s former business assets. Symbolics offers maintenance contracts for Lisp machines that are still in operation and licenses for their software, including the Macsyma computer algebra system and a port of the Lisp machine software Genera for Alpha processors .

In 1979 Russell founded Noftsker Symbolics Inc. after falling out with Richard Greenblatt . Greenblatt and Tom Knight designed a first prototype for a Lisp machine in 1973 at the MIT AI Lab, on which Noftsker also worked. Initially, Greenblatt and Noftsker planned a joint venture, but this failed due to disputes over the business model. Shortly thereafter, Greenblatt founded Lisp Machines Inc. ( LMI for short ).

Both companies initially recruited their staff primarily from other employees of the MIT AI Lab. Initially, Symbolics did not have its own premises and the employees continued to work in the MIT AI Lab. MIT let Symbolics do their thing because Symbolics made the software freely available to MIT in return. This led to the AI ​​Lab becoming extinct. This angered Richard Stallman , who worked at the AI ​​Lab and saw the AI ​​Lab's hacker culture lost due to the commercial interests of both companies . In 1982 Symbolics decided to no longer freely publish the changes to the operating system of the Lisp machines, which both LMI and Symbolics were using because of the shared history at the AI ​​Lab. Stallman, who saw the blame for the decline of the AI ​​Lab mainly at Symbolics and had access to the Symbolics software and machines, then decided to reconstruct the changes and make LMI available - although LMIs changes were not free either .

The Lisp machine software was based on the Maclisp dialect. Because of the many changes in the programming language, Symbolics later referred to its dialect as ZetaLisp . ZetaLisp served as the basis for the design of Common Lisp . Later Lisp machine software could also handle Common Lisp. In 1982 the MIT CADR-based Lisp machine LM-2 was introduced, which was only intended to represent a transitional solution to the significantly revised 3600 family .

Due to the increasing performance of general microprocessors and the so-called AI winter at the end of the 1980s and beginning of the 1990s, the Lisp machine business fell into a major crisis, which led to the end of many manufacturers of Lisp machines. Symbolics was particularly hard hit by the end of the SDI project, in which DARPA had financed many projects - especially in the area of expert systems - that had relied on machines and software from Symbolics.

Internal disputes ensured that management was changed. Assuming further growth, new offices and a new factory were purchased, but this turned out to be a fatal investment due to the development of the market.

Symbolics Inc. had to file for bankruptcy in 1993. Symbolics Technology Inc. was founded as the successor to take over the maintenance of systems that were still in use, the sale of the last remaining systems and the licensing of the Symbolics software.

In 2005, the owner of Symbolics Technology Inc., Andrew Topping, died. Since then, some former Symbolics employees have tried to publish the Genera source code under a free license . The US Department of Defense is currently still paying for Symbolics maintenance.

The LM-2, released in 1981, was an MIT CADR Lisp machine with minor improvements such as Fortran -77 support, color graphics, and an LGP-1 laser printer . 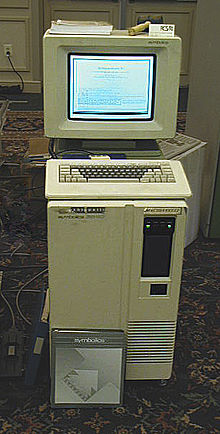 The 3600 family of Symbolic Lisp machines had been significantly redesigned in contrast to the LM-2, which was just a repackaged MIT CADR. The machine word width was increased to 36 bits (32 bits of data and 4 bits of tag) and the address space to 28 bits, which enabled up to 1 GB of virtual memory. In addition, special hardware was introduced for some instructions that had been emulated in the CADR. The console has been enhanced with a larger high-resolution screen and 16-bit audio. A Pascal toolkit, the CAS Macsyma, various graphics programs and a Prolog compiler were introduced as new software . The 3600 machines were called the l-machine and from the 3650 g-machine onwards .

Ivory was a VLSI microprocessor for executing Lisp microcode , which served as the basis for newer Lisp machines, but was also available as a board for workstations from Sun Microsystems ( UX ) and Apple Macintoshs ( MacIvory ).

Ivory worked with 40-bit data words, 8 bits being used as tags and 32 bits for data or addresses. Since only whole words could be addressed, 4 gigawords or 16 GB of virtual memory were possible. The chips were produced by Hewlett-Packard .

A RISC -based successor was to be designed with Sunstone , similar to the K-Machine planned by LMI . However, the project was discontinued.

The Lisp machine operating system Genera was ported to DEC Tru64 UNIX / Alpha systems in 1992 . Open Genera was much faster on alpha processors than on the last special Lisp machines. A license can still be purchased from Symbolics. There is an unofficial port for Linux / x86_64 .

Open Genera consists of around 1.5 million lines of code and is written in various Lisp dialects. A Lisp machine emulator was therefore developed for porting, as porting to a single dialect would have required massive changes to the code.

The Symbolics Graphics Division was founded in 1985 to harness the graphic capabilities of the Lisp machines for computer animation . Among other things, the 3600 was the first workstation with HDTV functionality. Symbolics Lisp machines were used, among other things, in Star Trek III: In Search of Mr. Spock to control the screens on the bridge; Among other things, because the screen frequency could be synchronized with the cameras. Symbolics released several computer-animated short films, including Stanley and Stella in: Breaking the Ice in 1987. The Graphics Division was sold to Nichimen Graphics in 1991 . But in 1993 a Symbolics was used to model the killer whale in Free Willy - Call of Freedom . The Symbolics graphics software (S-Graphics Software Suite) was ported to the PC at Nichimen and is still sold under the name Mirai today .

The company domain symbolics.com is the oldest registered .com domain on the Internet. It was registered on March 15, 1985 and sold to a domain dealer in 2009 .