from Wikipedia, the free encyclopedia
This is the spotted version , flagged on March 27, 2020 . There are 2 pending changes that have yet to be viewed.

Tenchi is a redirect to this article. For the asteroid of the same name, see (5017) Tenchi . 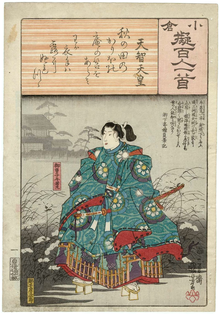 He was the first son of Jomei- tennō and his wife Kōgyoku and as such crown prince. His conspiracy with the Nakatomi against the Soga and the personal murder of Soga no Iruka before the eyes of the Empress led to the appointment of his brother Kōtoku to the Tennō. After the death of Emperor Kōtoku in 654, his mother Kōgyoku took the name Saimei and came back to power. She ruled again from 655 to 661. The Empress was killed in Kyushu on a trip to Korea , where fighting had broken out. He ruled from 661 to 672, until 668 still under the title of Crown Prince. From 667 he had his court in the land of Ōmi of Yamato and called this new residence Ōmi Otsu-no-miya, Ōmi-kyō for short , in today's Ōtsu in Shiga prefecture .

He is said to have had a total of 14 children. His empress was Yamatohime no Ōkimi ( 倭 姫 王 ). He was the father of the Kōbun -tennō and the Jitō -tennō, who became the wife of his brother, Prince Ōama, known as Temmu -tennō. The Junnin- tennō and the Kōnin -tennō were also his grandchildren.

Tenji is venerated in the shrine Shintō as a kami in the Ōmi-jingū in Ōtsu and in the Irie shrine (Shiga prefecture).

Background of the Taika reforms

Prince Naka no Ōe (later Emperor Tenji ) and Nakatomi no Kamatari (ancestor of the Fujiwara clan) broke the hegemony of the Soga family as thread pullers in the Isshi incident in 645 . In the context of the following Taika reforms (from 645/6 onwards) that strengthened the central government , not only civil servant ranks and titles were introduced or modified based on Chinese ( Tang ) practice, but also detailed regulations on land ownership for the purpose of tax collection , Privileges and subordinate duties. Finance also required the standardization of measures, weights and other units. As early as 652, with the abolition of private property on land (all land belonged to the emperor and was lent; from 743, farmers were allowed to keep new land that they had developed themselves as property permanently), with the hand of shūjo no hō the uniform Allocation of land to all (adult, able-bodied) free people and their taxation have been regulated. The reform aimed at centralization was accelerated by the defeat in Paekche (Korea, 663). During Tenji's reign, the first written pieces of law were also prepared, but were only officially promulgated after Tenji's death (Ōmi and Kiyomigahara laws 682 and 689, respectively). The resulting bureaucratic system of government and administration Ritsuryō officially existed until the end of the Edo period , but in fact only in name since the end of the Heian period . Usually, however, it only describes the period of "direct" rule by the emperor until 1184.