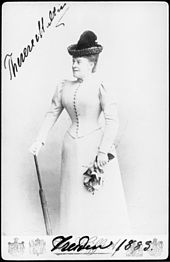 Grave of Therese Malten in the Trinity Cemetery in Dresden.

Therese Malten as Kundry in 1883

Malten, the daughter of a royal Prussian government councilor, appeared for the first time at a charity concert in Marienburg at the age of four. Later, on the advice of Anton Woworsky, she received training from Richard Kahle in the subject of highly dramatic in Gdansk and Berlin . Gustav Engel took over the singing lessons .

On May 30, 1873 she made her debut as "Pamina" in the Magic Flute at the Dresden Court Opera and was only at this opera until she left the stage in 1903. Guest appearances have taken her to almost all European opera houses. Richard Wagner , who heard her in Dresden in autumn 1881 as “Senta” in the Flying Singer , invited her to his 1882 Festival in Bayreuth to let her sing Kundry in Parsifal in Bayreuth . In 1883 and 1884, King Ludwig II asked her to sing “Kundry” in separate performances.

Malten had her residence from 1893 to 1930 in Kleinzschachwitz-Zschieren near Dresden. The Therese-Malten-Villa on the banks of the Elbe (opposite Pillnitz Castle ) was built by Bruno Müller in the neo-Renaissance style. In the lavishly renovated villa there is now a small guesthouse. Therese Malten supported orphans , war victims and other needy children .

She was the long-time partner of the Austrian philosopher, literary and music critic Helene von Druskowitz .

Therese Malten died at the age of 74 and was buried in the Trinitatisfriedhof in Dresden. In Dresden, Therese-Malten-Strasse is a reminder of her. She was an honorary member of the Dresden Court Theater.