This article is about the author Thomas King. For other people, see Thomas King (disambiguation) and Tom King . 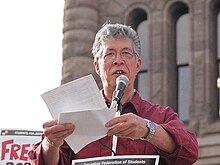 Thomas King (born April 24, 1943 in Sacramento , California , USA) is a Native American author. If he was also born in the USA , he is primarily considered a Canadian author, since he has lived in Canada for many years and, according to his own admission, feels more connected to his adopted country than to the USA; he considers the border between the USA and Canada to be drawn arbitrarily. He has both nationalities. He is partly Cherokee , partly of Greek, partly of German descent.

In addition to his career as a university professor and writer, he was involved in the radio show Dead Dog Cafe Comedy Hour from 1997 to 2000 . The show took place in a fictional café in the fictional town of Blossom, Alberta. Thomas King and his two comrades-in-arms Edna Rain (as Gracie) and Floyd Favel Starr (as Jasper) offered a mixture of humorous comments and serious criticism of the way the State of Canada dealt with the Indian inhabitants .

Under the pseudonym Hartley Goodweather , the crime thriller DreadfulWater Shows Up was published in 2003 . Another thriller starring Thumps DreadfulWater was released in 2006 under the title The Red Power Murders .
Also in 2003, as part of the Massey Lectures , he held a lecture series in five different Canadian cities under the title The Truth About Stories: A Native Narrative .

King's nonfiction book The Inconvenient Indian (2013) won the 2014 BC National Award for Canadian Non-Fiction and the RBC Taylor Prize. For his novel The Back of the Turtle , published in 2014, he received the Governor General's Award for Fiction and the Sunburst Award for Excellence in Canadian Literature of the Fantastic.