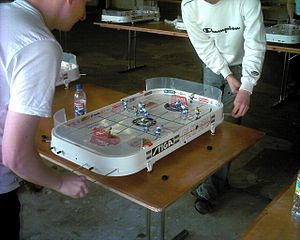 Table hockey (in Switzerland table hockey ) is a game that is popular in many countries in Europe and North America, especially in typical ice hockey nations such as Russia and Canada. Similar to the well-known table football , two players play on a mechanical game device that simulates a team sport.

Since the middle of the 20th century there have been a number of different makes from Canada , the USA , Russia , the Czech Republic and Finland . However, it was Swedish players who began to organize large tournaments such as world championships on the model of the local brand Stiga .

At the latest with the establishment of the world association, International Table Hockey Federation (ITHF), this brand gained international acceptance.

Table hockey is comparable to table football . The sport of ice hockey was transferred to a small table that is approx. 1 m long, 0.5 m wide and 20 cm high.

The game is played by two players. As in ice hockey, the goal is to score more goals than your opponent in a prescribed time. In contrast to table football, each of the 12 game figures is controlled with its own rod. The bars run under the playing surface along certain tracks. Their ends are led out on the long side of the table, so that you can move the rods and thus the players back and forth. By turning the rods you can turn the pieces around their own axis and play the puck with the pieces' bat.

A multitude of "moves" and combinations can be performed with it. Table hockey is an extremely fast game that requires good coordination and reaction.

As part of the 2005 World Cup in Riga , Latvia , the ITHF, the international table hockey federation, was launched.

The tasks of the ITHF are to spread table hockey all over the world and to organize international tournaments such as B. the world championships or the tournaments of the World Table Hockey Tour, which has been held since 2005 . Furthermore, an internationally valid set of rules was drawn up for the first time in 2006.

The rules in detail

One moment before the bully

Where table hockey is primarily viewed as a game, there are a variety of different rules, e.g. B. how long a game lasts and when a goal is valid. Often one orientates oneself on ice hockey.

In organized table hockey, however, there are certain basic rules that are clearly different from ice hockey:

The ITHF has had an official set of rules since 2006.

In 1993 German players from Hamburg, Bonn and Wilhelmshaven took part in the world championships for the first time. In the same year, the 1st German Championship was held in Königswinter in 1993. In 1995 the German Table Hockey Association (DTEV) was founded.

The highlight of the German table hockey scene was the hosting of the 1999 World Cup in Wilhelmshaven, where for the first time over 70 participants took part in the open competition.

Swiss players have been represented at the world championships since 1993.

The highlight of Swiss table hockey was the hosting of the 2003 World Cup in Zurich.