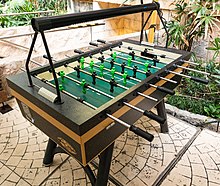 Table soccer is a sport applied to a game device or a the football modeled on game kickers , table football , table football , kicker box , Krökeln (Region Hannover) or Wuzzler or Wuzeltisch and Switzerland Töggelichaste ( table football) is called. The aim is to use (soccer) player figures (made of wood, plastic or metal) attached to rotating handle bars above a rectangular playing area to shoot a predetermined number of balls into the opposing goal. A foosball table is usually equipped with four handle bars on each of the two long sides of the playing surface, on which a total of eleven playing figures are attached per game party.

Table football has been used in education as a communication and rehabilitation tool for decades . There are many foosball tables in youth facilities, schools, scout homes, in playrooms in children's hospitals and in many children's rooms. Due to the low entry threshold, foosball tables are also often set up in restaurants .

It is believed that the first table football table (in Europe) was developed by the French Lucien Rosengart . Back then, Rosengart was an employee of the car manufacturer Citroën . The Swiss company “Kicker”, based in Geneva, built their tables based on this “original table” (where the bars were still at the head ends). The tables were so popular in Switzerland, Germany and Belgium that the word “kicker” became a synonym for table football in Germany. In German-speaking Switzerland , the tables are colloquially called "Töggelikasten", in Austria they are often "Wuzzler", and occasionally "Wuzzlkasten". The Galician Alejandro Finisterre secured the first patent for a foosball table in 1937.

Verifiable patents identify an Englishman as the inventor of table football: On October 14, 1922, Harold S. Thornton registered a device with rotating bars with the patent office. Even the rough structure of the original table corresponds to today's tables. However, it took another 30 years for the game to establish itself in Germany. It was not until 1967 that the first German championship was held through an initiative by the Bildzeitung . The DTFB was founded two years later .

Significant for the development of the ambitious table football sport in Germany was above all the machine sales company Löwen , whose long-standing supplier is Leonhart. Löwen organized a national tournament series in Germany in the 1980s and 90s, which also attracted many top players from neighboring countries and the annual highlight of which was the so-called "German Championships" in Bingen, the headquarters of Löwen. In 2000/01, Löwen withdrew from the event for economic reasons. Shortly afterwards, active players founded p4p eV ( Players 4 Players Tischfussballvereinigung eV) to continue the tournament series.

According to a final judgment by the Hessian Finance Court on June 23, 2010 (file number 4 K 501/09), an association that operates table football can be recognized as a non-profit organization.

Table football is known by other names than those listed above in certain regions:

The DTFB is the umbrella organization of the German state associations, which are organized in a similar way to football . The regional associations organize regional championships and regional leagues and, according to their rankings, send players to the German championship, which is similar to the DTFB Cup, and also to league teams for the 2nd and 1st Bundesliga. Players can also qualify for the championships via supraregional challenger tournaments organized by the regional associations and receive ranking points for the DTFB ranking list. Challenger tournaments can be organized relatively easily by the individual clubs. Spatially, these tend to take place in northwest Germany. Apart from that, there are some larger regional leagues (e.g. in Berlin, Freiburg, Hamburg etc.) in which the players can compete. Around 7,000 players are organized in the DTFB (as of 2015).

The first German table football championship was held in Braunlage in 1967.

The P4P eV organizes an annual, national tournament series, which thanks to high and guaranteed prize money also attracts top international players. Unlike in football, a newcomer can also play against the world's elite here. The tournaments usually take place in conference hotels at around 40 to 80 tables with around 200 to 800 participants. There are more than 10 disciplines (usually) held in double knockout mode . Doubles (two against two) and singles (one against one) are played in each of the three performance classes, with high starts being possible. That is, a newcomer can participate anywhere. There are also women doubles and singles as well as a DYP .

Sponsored by P4P eV and DTFB, the DYP tour will take place for the second time in 2012/13. There are many smaller (sometimes only 10 to 20 participants) ranking tournaments in the MonsterDYP mode throughout Germany , in which the participants can collect points for a ranking. The best players then take part in a final tournament at the end, in which they play for material and cash prizes. When it was held for the first time in 2011/12, 1007 tournaments were held at 47 locations in 10 months, in which 2784 players took part.

In Austria, the Table Football Association Austria (TFBÖ) is responsible for the organization of TFB Sports. The game is usually played on the Garlando table, the design of which has been increasingly approximating to international tables since 2002.

In 2002, on the initiative of eight national associations (Belgium, China, Denmark, France, Germany, Italy, Great Britain, USA) the ITSF ( International Table Soccer Federation ) was founded as the global umbrella organization of national associations. At the end of 2009, the France-based ITSF comprised 60 national federations. The association has observer status with the Global Association of International Sports Federations . The ITSF organizes international tournament series and world championships and has set itself the goal of making “foosball” Olympic. In this way, the commercialization of sport is also promoted. In order to achieve this, the association tries, for example, to bring all common tables to a common denominator with regard to basic properties. This should make it possible to compare the performance of the players directly and independently of the table being played. There are currently five officially approved tables (see table types).

The most important tournament rules

Depending on the associated association or organization, the rules differ in small details.

The main shots and techniques

Many players wedge the ball between the table top and the foot of the pawn. Either "front" - the figure is leaning forward - or "back" - the figure is leaning back. This technique is often referred to as "soccern", hence the various table names. The clamping of the ball requires a grip of the ball on the table surface and is therefore not practicable on all table models. The back or front positions may be stuck. a. the starting points for the “pin-shot” and “jet” shooting techniques (see below). An alternative to clamping the ball is to place the ball next to the figure's foot and then push or pull it from a resting position (push or pull shot).

Table football tables differ, among other things, in the type of rods, the material and the shape of the dolls (play figures), the properties of the playing surface and the nature of the balls. Different techniques are used depending on the type of table. Widely used models are usually also available in a version with a coin-operated device, which is then set up in pubs and other publicly accessible places and thus leads to a high distribution. Some tables have glass tops to prevent reaching in or accidentally shooting out balls.

With an area of ​​at least about 2.70 by about 1.90 meters, there is enough space for the body movements of those playing.

Variants and other table football games

Giant football table in Berlin with one meter high Buddy Bears , set up before the 2006 World Cup 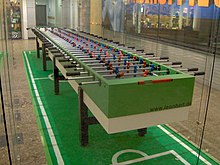 Custom-made for 11 players per side