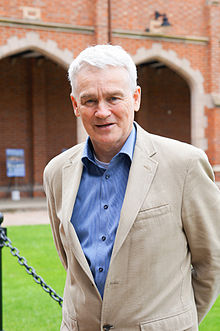 McKearney was born into a family with a long Irish Republican tradition. Both his grandfather and father fought in the Irish Republican Army in the Irish War of Independence . His maternal grandfather was an assistant commander in the North Roscommon Brigade . McKearney lost three of his brothers in the Northern Ireland conflict . Sean was killed by the explosion of his own bomb in 1974 and Pádraig by the SAS in 1987. Kevin, the only non-IRA member, was murdered by the Ulster Volunteer Force (UVF) in 1992 while he was working in his parents' butcher shop.

He received his A-level diploma on August 9, 1971, the day the British government began its internment policy - arrests without trial . McKearney hoped to study at Queen's University Belfast to become a teacher. However, his performance was not good enough to be accepted with certainty. McKearney described the introduction of the internment policy as "a drop that broke the barrel" and decided to join the East Tyrone Brigade of the IRA. He became their commander in the mid-1970s. He was arrested on October 19, 1977 for the murder of Stanley Adams, a postman and part-time British soldier with the Ulster Defense Regiment (UDR). McKearney was interrogated for seven days under the Prevention of Terrorism Act and reported that he was ill-treated while in detention. He later received at least 20 years' imprisonment for the murder of Adams after the court accepted a confession on the testimony of a Royal Ulster Constabulary (RUC) police officer , which McKearney did not sign.

McKearney was involved in the Blanket Protest , Dirty Protest and the Irish Hunger Strike in 1980. IRA members Brendan Hughes , Raymond McCartney , Tom McFeeley, Seán McKenna and Leo Green also took part in the hunger strike , as did John Nixon, who was a member of the Irish National Liberation Army (INLA). Before the hunger strike started, he taught his parents:

I put all my cards on the table. I will go on a hunger strike. When I die, I want to go back to Roscommon and be buried by my grandfather's side [...] Don't let yourself be influenced, your friends are only in the republican movement. If I die, the family must not be ashamed. If at my funeral the press should say, "Look how the IRA let your son die," they say, "My son died an Irish soldier, not a British criminal."

McKearney refused to eat for 53 days from October 27 to December 18, 1980 and, according to a doctor, had only a few hours to live when the hunger strike of Brendan Hughes, the then commander and strike leader of the IRA prisoners in Maze Prison , canceled.

McKearney was released in 1993 after 16 years in prison. In 2003 he appeared in a BBC television documentary called Life After Life with former UVF member Billy Mitchell, who was also previously sentenced to a long prison term. He now works as a freelance journalist for Fourthwrite and is an organizer of the Independent Workers Union of Ireland .