This article covers the colorant used in printers. See Toning for the chemicals used to develop silver photographs .

Toners are colorants for electrostatic printing processes. They are mainly used in copiers and laser printers to create a print image on a substrate , mostly on paper .

Toner is a very fine powder made up of 5 to 30 µm particles. Due to the very small particle size, the powder is flowable and behaves similarly to a liquid . Toner is made up of synthetic resin , pigments , magnetizable metal oxides and various additives.

The demands placed on the toner are very high: On the one hand, it has to meet the requirements with regard to the print result - this includes deep blackness, the finest possible graduation without the effect of dirt, and the plastic application should be low. On the other hand, the toner should adhere to as many materials as possible, just not in the device itself (fuser rollers). Furthermore, it must meet the technical requirements of the device, must not accept moisture and must remain constant in its consistency until it is used.

One of the most important metrics for a toner is the toner coverage. This indicates how many pages can be printed with the particles contained in the toner before the cartridge has to be replaced. However, the manufacturer's information is based on various calculation and standard models: The degree of coverage is often specified using the 5 percent coverage (i.e. the assumption that a page is printed with around 5% toner). This percentage corresponds roughly to a classic business letter. Alternatively, manufacturers use DIN 10561, which is based on the Dr. Grauert letter . According to this calculation model, the toner consumption is determined on the basis of around 2.8 percent coverage, which means that the specified number of pages can be significantly higher. Most of the information provided by the manufacturer is in compliance with ISO standard 19752. Here, too, a 5 percent coverage is assumed, but the manufacturers have the toner consumption determined at three different test centers. The manufacturer's information then corresponds to the average range value of these three independent tests.

One-component toners contain magnetizable additives that are necessary for the construction of a so-called toner brush. The particles align themselves with the magnetic field of the stationary magnetic core of the so-called developer roller and are statically negatively charged by the friction of the rotating roller. This "brush" touches the photoconductor drum so that the toner particles are transferred to the photoconductor drum during the copying process. The advantage of easy maintenance (replacement of a single cartridge) is offset by the higher price of the toner. One-component toner is usually black because the developer it contains would falsify colors.

In color toners, the two components developer and colorant must remain separate in order to avoid color falsification. Two-component toners are mainly used in color copiers and digital printing machines. The developers are mostly the finest iron particles and are not applied to the paper, i.e. they are not used up. In the past, the developer had to be filled in separately when the developer unit was exchanged , but in new systems it is included in the developer units, so that only the coloring toners have to be added via cartridges. In small systems such as laser printers , the developer is also replaced when the cartridge is changed. The mixing ratio of the components must be measured, because too high a proportion of developer can damage the surface of the photoconductor drum during the printing process. Modern systems carry out the calibration automatically.

A transfer liquid, also incorrectly referred to as “liquid toner”, contains the actual colorant as dispersed particles ( pigments ), some of which are less than 1 μm in size . The exposed drum rotates in the transfer liquid and picks up the toner particles. Transfer fluids do not require any fixation, and the small particle size allows higher print quality to be achieved (see also HP Indigo ). 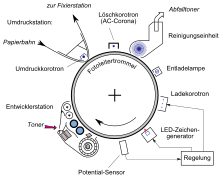 Order on the medium

Since toner is fixed on the paper by means of heat, it can also be removed again with heat. This behavior is used in the so-called toner transfer method . This usually involves printing on special foils or papers on which the toner does not adhere too firmly. After printing, the toner image can be transferred from this carrier to T-shirts, metal plates (for example signs) or even copper-clad circuit boards with the help of an iron or a laminator.

Toner is very dirty, which is why it is usually sold in the form of one-component toner in closed units ( toner cartridges ). To clean laser printers, copiers, etc., special toner vacuum cleaners are used , which can both hold back the fine toner particles and prevent electrostatic charging (and thus any damage to the equipment to be cleaned).

Toner is not a harmless substance as long as it has not been fused onto the paper. According to Öko-Test , the fixation of toners made on a synthetic resin basis ( styrene - acrylate - copolymer ) can release styrene (suspicious of cancer) and possibly small amounts of benzene (carcinogenic) through heat and pressure . In addition, increased amounts of dibutyltin were found among the compounds detected, which has a hormone-like effect in humans and animals. Traces of the toxic tributyltin (TBT) were also detected. The test methods of Öko-Test are called into question by the magazine c't . In particular, it was criticized that only two printers were examined more closely and that the printers that were tested by the c't as particularly harmful due to high ozone emissions did well.

Toner causes fine dust and has a reputation for being harmful to health. Measurements of toner dust emissions from laser printers and copiers by the Institute for Occupational Safety and Health of the German Statutory Accident Insurance showed that the concentration values are well below the general dust limit value (A fraction) of 3 mg / m³ even under unfavorable conditions. Nevertheless, one should not be too careless when handling toner, because the fine particles that make up the toner are so small that they can partially pass through the filtering and protective functions of the lungs and thus get into the body. Even the filters of vacuum cleaners cannot hold back the fine particles. The toner particles are first distributed in the air or in the room by vacuum cleaners.

The Waste Act prescribes environmentally friendly disposal. In addition, the manufacturers are obliged to take back empty toner cartridges for disposal free of charge. You can do this for. B. give it to the dealer or send it back to the manufacturer. It is also possible to refill the toner cartridges with refill toner in order to avoid disposal altogether. Various companies have specialized in this work and buy empty toner cartridges at prices from 10 cents to 5 euros each and sell them as so-called rebuilt toner after they have been filled, worn parts have been replaced and checked . This is classified as ecologically and economically sensible, as the toner cartridges are elaborately designed and made of many different materials. Accordingly, a refilled cartridge usually costs significantly less than a new cartridge.

Since 2012, it has also been possible in Germany to recycle defective toner cartridges. In the previous years, around 80% of the 55 million tonnes of cartridges produced in Germany alone were burned. A cartridge requires an average of 2 kg of petroleum during manufacture and causes around 6 kg of CO 2 . The recycling of toner cartridges is usually uneconomical, which is why toner cartridges are thermally recycled at recycling centers together with bulky waste (incineration).