The title of this article is ambiguous. Further meanings are listed under Tran (disambiguation) . 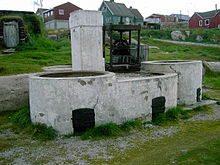 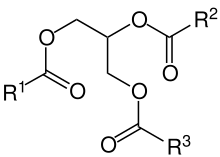 General chemical structure of the triglycerides of Tran. R 1 , R 2 and R 3 therein are alkyl radicals or alkenyl radicals with a mostly odd number of carbon atoms. Tran is like other fats and oils a mixture of different tri esters of glycerol .

Tran , also "polar oil" or "fish oil", is a from the adipose tissue of marine mammals such as whales and seals , the so-called. Blubber , and fat fish obtained by heating, pressing, melting or simple decanting oil . Like other fats and oils, Tran belongs to the group of triglycerides , i.e. it is a triester of glycerine .

The whale oil obtained by boiling chopped up whale fat was used as lamp oil until the beginning of the 20th century ; it was the first liquid fuel available in large quantities and its extraction has been the main economic driver of whaling . This was operated on a very large scale, especially in the 17th and 18th centuries, by seafarers from England and the Netherlands. Preferred regions for this were initially the coasts off Svalbard and the Northern European Sea , which at that time had extremely high populations of whales and seals; After the decline of the northern stocks, whaling then increasingly shifted to the sub-Antarctic waters of the South Atlantic and South Pacific.

By becoming rancid , oil can acquire an unpleasant smell and taste while it is fresh.

Cod liver oil is not obtained from whales, but from the liver of fish, especially cod and cod .

The picture below from an 18th century work shows the preparation of whale oil as it was widespread on the coasts of the North Sea ( Greenland , Svalbard ). Pieces of bacon are delivered in barrels from the whaling ships (a). They are heated in the large copper kettle (b) and brought to a boil (c) so that the fat can be skimmed off with spoons and poured into the canal. There the fat is sieved (d) and then flows through several troughs filled with water, in which the fat cools down. Lastly, there is the coopers packed in barrels (e). According to the inscription on the picture, a whale delivers 45 to 50 quardeeles of oil, which is roughly 5 tons in today's units.

On some archipelagos, such as the Kerguelen and South Georgia , the boilers were partially heated with penguins , as trees were in short supply on site and the aim was to conserve the fuel supplies on the ships.

At the beginning of the 19th century, the yield from whaling decreased significantly, as the whaling areas had been massively overfished. The slow reproductive rate of the whales could not keep up with the catch rate by the whalers. In the first decades of the 20th century, tran served as a raw material for making margarine , candles and soaps and as an ointment base for cosmetics and pharmaceuticals . Waltran was used as a lubricant until the 1950s.

With the advent of the oil industry in the late 19th century, the oil was increasingly replaced by petroleum . Today other raw materials, mainly vegetable fats , have taken its place. Whaling is now regulated by the International Convention on the Regulation of Whaling and is prohibited in most states.

Fish oil is used as a lubricant and release agent, as leather fat, in the production of pet food and feed for farm animals and for rearing in aquacultures . Fish oil is also used as a dietary supplement because it contains omega-3 fats ( docosahexaenoic acid (DHA) and eicosapentaenoic acid (EPA)). These are made from the fat of fish such as salmon.