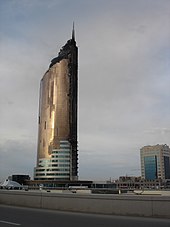 The Transport Tower ( Russian Транспорт Тауэр ) is a skyscraper in the Kazakh capital Nur-Sultan . It is the seat of the Ministry of Transport and Communication and the Ministry of Industry and New Technologies of the Republic of Kazakhstan .

The Transport Tower is located in Nur-Sultan's new government district on a large square at the end of Water-Green Boulevard, where the Bajterek Tower , the city's landmark, is also located. Opposite is the headquarters of the Kazakh state oil company KazMunayGas .

The Transport Tower was opened on October 24, 2003 by the incumbent Kazakh President Nursultan Nazarbayev .

On May 30, 2006 at 10:09 a.m. UTC (4:09 p.m. local time on May 30, 2006) a fire broke out on the 30th floor of the Transport Tower, as a result of which more than 2,000 people were evacuated from the building. The fire spread down the stairwell to the lower floors and to the top of the building. Three people were injured. The damage amounted to 1.2 billion tenge . The employees of the two ministries housed in the tower had to continue their work in the Kazakh Foreign Ministry .

Transport Tower as a 3D model in SketchUp's 3D warehouse