Transport routes are traffic routes or conveying routes on which goods, people or data are transported . A distinction is made between land, water and air transport routes that are used for the different types of transport . 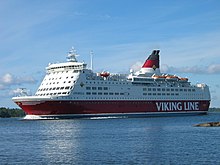 Passenger ferry traffic on the waterway

The transport route by water is mainly used by maritime shipping and inland shipping (on rivers, large lakes and canals). The main carriers are:

State, commercial or private air traffic is generally considered to be the air transport route . But space travel is also increasingly used to transport satellites into space; where usually most of the way there is no conventional air away.