BARS - Russian БАРС = snow leopard - is the name of the strategic tropospheric communication system of the countries participating in the Warsaw Pact . The system was set up in the 1980s in analogy to the NATO system ACE High with the aim of maintaining leadership between the countries even after the use of nuclear weapons in a nuclear war . It was a sub-component of the Warsaw Pact's Single Intelligence System (ENS).

With the exception of Romania , the system comprised all participating countries of the Warsaw Pact and provided for a certain number of fixed, usually bunkered, tropospheric radio stations for each country. Its expansion took place from the western regions of the USSR over four axes; two each to the west and south-west. These directions corresponded to the possible main directions of operation in a military conflict on the Central European theater of war .

The establishment of the system was a response to NATO's double decision of December 12, 1979, which provided for the stationing of new cruise missiles with nuclear warheads in NATO countries in the event of the failure of negotiations on the reduction of carrier weapons . Due to the specific radiation and propagation conditions of the electromagnetic energy of the system ( troposcatter ), the probability of maintaining leadership at the strategic management level after the use of nuclear weapons was given.

Use in the Cold War

In addition to verbalized language, it is primarily technical communications (telecommunications) that make it possible to manage command posts in the first place. The communication means include wired, directional radio , radio , satellite or courier and field mail. In war, these are all organized simultaneously between two command posts, taking into account the management level. In the event of failure, each individual means represents an alternative for the remaining means. In their entirety, they determine the steadfastness and reliability of leadership. As a result of its sheltered accommodation and the particularities of the emission of electromagnetic energy, the communications medium tropospheric radio shows a comparatively low susceptibility to interference in a nuclear war. This results in commitment at the highest management level. In no way does this mean that leadership in a nuclear war is guaranteed via this communication medium. All communication channels of a tropospheric radio direction were switched on via conventional communication media (e.g. field cable or radio link connections) to the command posts, some of which were far away. And the vulnerability of these communications media to a nuclear attack is well known. If these are destroyed, there is no transmission of oral or written information, so that guidance via the troposphere communication system is no longer possible. 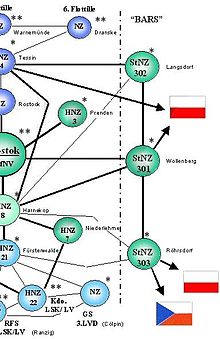 The establishment of the strategic tropospheric intelligence system was discussed by military experts in Moscow in September 1980 , decided and submitted to the governments for ratification. Despite the greatest economic and financial difficulties in the countries, the system was implemented outside of the planned investments in the period from 1982 to 1987, albeit with restrictions in some countries. So were z. B. in the VR Hungary not all tropospheric radio stations are built in underground protective structures (bunkers). In the VR Poland , above-ground, unprotected tropospheric radio stations were partially built and put into operation. The construction of protective structures (bunkers) began in the immediate vicinity, but was not completed until 1990. The system was designed to be stationary and enabled a high degree of maneuverability with communication channels on the axes and castling. In the event of fighting in the west and south-west direction, the mobile version of the device system was included in the location and equipment plans (STAN). In the GDR , the mobile variant was introduced in February 1990. The system officially went into operation on December 1, 1987 and was operated until May 7, 1990 according to the program times. Then it went into operational use (continuous operation). On August 14, 1990, the system in the GDR was shut down and all connections were shut down.

The GDR was involved with three tropospheric radio stations, which were installed in protected structures (bunkers):

Each of the protective structures was planned, built and prepared for the reception of four sets of tropospheric radios of the latest generation. A steel lattice mast was assigned to each equipment set. In theory, connections could be made in four directions. For economic and operational reasons, not all equipment sets were installed by 1990. The formation of 60 or 120 tropospheric radio channels was possible in each direction. The locations of the stations were selected on the basis of operational and strategic aspects and took into account the integration of the NVA into the coalition forces. The troposphere radio station 301 in Wollenberg ensured, among other things, the provision of troposphere radio channels to the message center of the Ministry of National Defense and its main control center in Harnekop . At the national level, the troposphere radio stations were included in the NVA's message system as the support message centers 301-303. These names were used to hide their existence.

Due to their degree of protection, the bunkers of the troposphere radio control centers in the GDR were integrated into the so-called emergency and emergency telephone network of the NVA. The network was part of the command system and was included in the NVA's secretly prepared message system in the event of war. The FVS 4 remote switching cabinets installed in the bunkers were only used for this task.