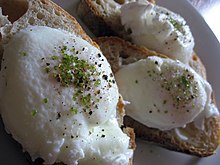 Lost eggs or poached eggs are eggs that are gently cooked ( poached ) without shell in low-boiling water (80 ° C) .

For preparation, fresh eggs are beaten one by one into a ladle or saucer, so that they can slide carefully into unsalted, low-boiling water with a little vinegar . The vinegar causes the outer protein to coagulate more quickly. These quickly coagulated parts of the egg hold the remaining mass together and prevent the egg from spreading in the boiling water. The egg white should envelop the yolk, which takes some practice. After three to four minutes, the eggs are removed, quenched , carefully placed on kitchen paper to drain, and any irregular edges parried.

As an ingredient in food

Lost eggs are often served with spinach and are part of various classic dishes such as: B .:

The Japanese onsen tamago cooked in the bowl has a consistency similar to lost eggs due to the special cooking method.