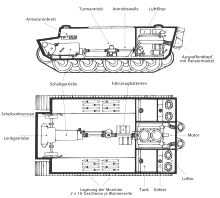 Longitudinal section through a Tiger I tub 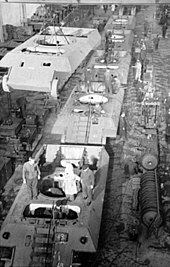 Processing of the hull of a Tiger tank at Henschel & Sohn

The tub forms the lower part of a tank and thus its outer shell. It gives the tank shape, strength and protection. The tub carries the main assemblies of the tank or connects them to the overall vehicle.

The  French designer Rodolphe Ernst-Metzmaier , who developed this concept at Renault during the First World War , is considered to be the inventor of the self-supporting armored hull - and the rotating turret . Construction of the Renault FT began there in mid-1916 . The seven-ton tracked vehicle with a 35 HP petrol engine was ahead of its time in many respects and a successful development.

In all tank designs, the hull accommodates the tank's engine, including ancillary units, gearbox and fuel. The drive that carries the chain or wheels is attached to the tub . In the case of tanks with a rotating turret , the hull accommodates the turret with a pivot bearing, and in the case of casemate tanks, the mount directly . In modern battle tanks , at least the driver had his place in the hull and the other crew members had theirs in the turret until the 2010s. With armored personnel carriers it is the other way round: mostly only the gunner and commander have their place in the turret; the driver and the mounted armored infantry group are accommodated in the tub.

In battle tanks, the hull is made of cast steel or welded armor steel , and in armored personnel carriers seldom also made of aluminum . The tub is intended to give the crew and the internal assemblies, among other things, protection against direct and indirect fire, mine explosions and chemical warfare agents. In addition, the tub has a certain thickness (armor) and can be hermetically sealed. The tightness of the tub also enables water obstacles to be overcome, either by underwater travel (UF) or wading through or (with buoyant armored personnel carriers and some armored howitzers) through water travel .

The hull is most heavily armored on the front that is most endangered in conventional combat; the hull bottom and ceiling are usually the weakest. The wall thicknesses of the sides and the rear are usually in between. A design principle for reinforcing the armor effect is the bevel of the front or the side walls of the tub, which means that installation space is lost. Since the end of the Cold War , asymmetrical warfare has become increasingly important in the design and modification of tanks. This also applies to the distribution of the armor on the hull. The danger of frontal fire from other main battle tanks decreases, the threat from improvised explosive devices (IED) increases from below or from the side. This scenario is reflected in designs such as the Buffalo , on whose V-shaped tub floor the principle of inclined armor is applied. Another aspect of asymmetrical warfare is the increase in combat in urban areas , which increases the threat from above - for example from RPG shooters on rooftops. The bathtub ceiling, traditionally only thinly armored outside the area protected by the tower and additionally weakened by ventilation slots, must be additionally protected.

On the basis of a tub construction that is matched to the engine train and the chassis design due to the size and load-bearing capacity of the installation spaces , several tank variants can be designed or built - analogous to the platform principle . In addition to the external dimensions, the armor thickness and the defined maximum weight, key design issues when developing a hull are the placement of the combat turret and the space for the engine. The turntable accommodating the combat tower should have the largest possible diameter within the available installation space. At the same time, the combat tower with its rotating parts protrudes deep into the tub. As a result, the engine with its large overall height cannot lie below the combat tower. This results in two basic design variants for modern tanks: