Elevated reservoir on the Rennsteig, near the Hohe Sonne, built in 1900.

The Wartburg water line is a pipeline built in 1886 and primarily served to supply the Wartburg with drinking water ; parts of the Eisenacher Südstadt have also been supplied with this water since the 1940s .

The Wartburg aqueduct connects spring areas on the western outskirts of Ruhla - the granite spring (601 m above sea level), the Meininger spring (595 m above sea level) and the tunnel spring (585 m above sea level) in the Ruhla Ottowald and in the Bärenbachtal via one around 24 km long pipeline with the collecting tank in the keep of the Wartburg (425 m above sea level). Due to this difference in height, this pipeline system does not require pumping stations. There are several ventilation stations along the route, including the Jubelhainsborn . Due to the topographical conditions on the Rennsteig, the pipeline route does not take the shortest route to the Wartburg, but has to take around 15 km of detours. The hunting lodges Hohe Sonne and Wilhelmsthal were connected to this supply line at the same time. In the section Hohesonne - Forsthaus Sängerwiese the line runs along a forest road just west of the Dragon Gorge , also past the Knöpfelsteichen .

During the restoration work on the Wartburg, which also included the creation of comfortable living and representative rooms for the ducal family, the problem of the water supply was discussed several times. In a letter to the chief architect Hugo von Ritgen , Carl Alexander von Sachsen-Weimar-Eisenach notes on May 9, 1884:

“There are two projects relating to this question: one - by H. Bornemann - to lift the water from the ponds to the castle using a steam engine to be built on the upper tap pond . The other from Oberjägermeister von Strauch - to lead the water from the Ottowald over the Rennstieg to the castle. I don't yet know what both should cost ... "

The fact that the construction costs of a water pipeline to Ruhla would ultimately play a subordinate role was also the result of the analysis of the Eisenach drinking water wells and spring areas commissioned by the Eisenach city administration at about the same time. According to these analyzes, the water quality of the springs in the red-lying rock was "strongly (impaired) by amounts of nitric acid salts and organic substances, which made it unhealthy and nauseating ...".

Since the 1860s, the growth of the city has resulted in a permanent water shortage due to the increasing demand for drinking and service water, which was exacerbated by the losses from the inadequate pipe runs . Thus, various projects arose to break new ground in the drinking water supply and to lead the drinking water into the city via long-distance pipes. A disadvantage for the Wartburg was its exposed location above the city; an expensive elevator would then have to be created specifically for its supply, which was also provided for in the Bornemann project.

The opening of the first central drinking water supply system in Eisenach took place on December 1, 1874. At that time, 1200 properties were initially connected. The water was drawn with a cast iron pipe from a well field in the middle Erbstromtal , south of Farnroda . After the operational reliability had been established over an observation period of ten years and further advantages of the pipeline became apparent, the decision in favor of a pipeline into the Ruhla headwaters was made.

The new keep was built between 1853 and 1859, on the sixth floor of the tower a 35 m³ water tank was installed in 1886, riveted together from prefabricated metal sheets, which collects the incoming water as an elevated tank and distributes it in the castle grounds via appropriate drainage pipes. During the construction of these pipeline networks, on the one hand, great importance was attached to laying them as concealed as possible; on the other hand, it had to be ensured that the pipes could not be damaged by frost even in winter. From 1897, a specially appointed "water master" was part of the Wartburg's staff.

The costs for the ongoing maintenance and repair of the now 125-year-old line pipes have increased enormously in the last ten years, a replacement of the worn out cast iron pipes is therefore inevitable. It started with the supply lines in the Ruhla area. In 2008 a section of 650 m in length was replaced and in 2009 250 m of double and 400 m of single line were replaced. In April 2010, the work was completed on schedule with an approximately 5 km long pipeline section between Wartburg and Hoher Sonne, for which the Wartburg Foundation, as the client, received a funding notification from the then Federal Minister Wolfgang Tiefensee in July 2009 . 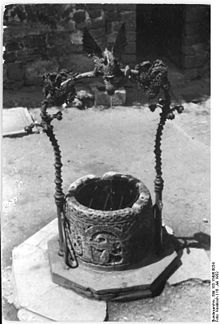 Ornamental fountain in the front courtyard

Although there are some springs and streams in the vicinity of the Wartburg, the drinking water supply to the castle was always problematic even in times of peace. Inside the castle walls there is a large cistern which made the rainwater in the rear courtyard usable, but which was not sufficient for the usual needs. The castle fountain in the front part of the castle is a mere ornament and a romantic ingredient of the 19th century.

In addition, it was possible to save large amounts of water, for example by watering and accommodating the riding and draft animals at appropriate drinking places outside the castle - this is also indicated by the field names "Gulanger" on the Hainteich and "Viehburg" above the Silbergräben.

In the months of fighting, the Wartburg 1307-1308 the besiegers of the area of the attempted Eisenacher castle from making the tank in the rear courtyard unusable by a Blide and later carcasses hurled stones toward that goal.

View from the south into the cistern

The current impression of the cistern in the rear courtyard no longer corresponds to the condition at the beginning of the 19th century. While this building now dominates almost the entire courtyard between the Palas and the Gadem , depictions from the time before the restoration show only a modest building in the same place. In the middle of the 19th century, this part of the castle courtyard was uncovered down to the rock in search of building remains from the early days of the castle, and at the same time the filter body of the cistern was destroyed. Ritgen mentions this with regret in his guide published in 1860 and adds structural details. The cistern was sunk into the surrounding rock in a circular shape, and in its center it had a cylindrical walled well shaft. The space created in this way was filled with stones and sand, into which the supplied water was introduced for cleaning. The shaft was 36 feet deep and  three feet in diameter. A reel was used to convey the water . Invoices for repairs and construction work on the cistern prove its use for the years 1523, 1529 and 1536, and the system was also improved by building board cladding as weather protection. To secure the depression, which is now constantly filled with rainwater, a stepped parapet wall with a gate for cleaning work was built on the side.