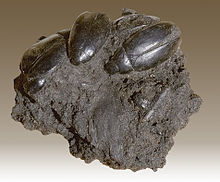 The water beetles (Hydrophilidae), also called piston water beetles or water friends, are a family of beetles. There are different views about their delimitation. Some researchers prefer a narrow demarcation that essentially includes the subfamilies Hydrophilinae and Sphaeridiinae. The subfamilies Helophorinae, Georissinae, Hydrochinae and Spercheinae would be independent families. According to the more traditional view, these are still run as subfamilies. This broad demarcation is followed here. The family accordingly comprises 3335 species in 176 genera (as of 2010).

The majority of all hydrophilids develop in water, and most of them also live there as adults . The Georissinae live in humid habitats on the shore zone . The representatives of the subfamily Sphaeridiinae mainly live in dung and putrefactive substances without reference to water. In all groups, however, there are a number of exceptions with a different way of life.

Most hydrophilids have a more or less flattened, oval body. The head, pronotum and elytra usually form a closed contour, the pronotum is widest at the base (that is the side towards the elytra) and narrows in an even curve towards the head, it is almost always significantly wider than it is long. The rear edge usually has an additional inner edge that connects it firmly and immovably to the wing covers. Normally, the underside of the anterior breast segment (Prosternum) is also extended backwards into a strong process that engages in a recess in the mid-breast (exception: Georissinae). In connection with the mostly smooth, hairless or slightly hairy surface, the water resistance is reduced (streamlined shape). In some subfamilies such as the Helophorinae or the Georissinae, the pronotum is narrowed at the base and the body contour is thus constricted, these groups have no swimming ability. The head always sits close to the pronotum, mostly it is drawn in up to the eyes. Many species without buoyancy are short-oval and highly domed with a flat underside, but usually without the ability to ball. In contrast to the mostly slightly hairy top, the entire underside is usually covered with very fine and dense, water-repellent hair that supports breathing (see below).

The legs, which are usually strong, usually have five, rarely only four feet (tarsal) limbs. In the case of forms that live in water and are able to swim, a loose hem of elongated webbing hair is usually pronounced on the middle and rear legs. Most Hydrophilidae are relatively poor swimmers and only colonize stagnant or poorly flowing water. The legs of most species are flattened and have a recess on the inside into which the rails can be inserted. Some species also have antennae pits on the front chest. Almost all species have fully developed hind wings and are often good fliers.

The special feature of all members of this family are the seven- to nine-part bulb-like antennae, to which they owe their name. The last three links form a velvety, hairy club (in some groups one or two more links are attached to the club). The buttons on the lower jaws and lip are as long as the feelers or longer. This reversal of the usual length ratios goes hand in hand with a partial takeover of the sensor function (smell and taste) by the buttons, since the sensors are used for breathing. Breathing air is stored under the wing covers and in the fine, water-repellent hair on the abdomen; this also enables longer immersion through oxygen absorption in the air cover from the water ("physical gill" or plastron breathing ). To get air, the beetle touches the surface of the water with the left or right side of the head, sometimes changing sides in quick succession. The antenna of the respective side is placed on the surface of the water, along with the air is sent with antenna vibration and pumping movements of the abdomen over a fine hairline on the head side, covered by the folded down last antenna elements, to the fore chest and from there over the whole underside of the body and into the Tracheal trunks headed.

On the beetle's abdomen, five, rarely only four, belly plates (sternites) are visible; the tergites hidden under the wing covers are usually seven, i.e. H. two more to which no sternites correspond.

Hydrophilids are separate sexes, and only a few species (e.g. Anacaena lutescens ) have been shown to have parthenogenic reproduction as an alternative . The females of almost all species have a spinning device at the end of the abdomen, with which a cocoon is spun, in which the fertilized eggs are deposited individually or in small clusters. The cocoon consists of a two-layer protective cover made of proteins (silk), it often has an artful structure that is typical for the species and can be used for identification. A chimney-like structure on the cocoon is used by many aquatic species or species that live in other moist substrates to renew the air they breathe for the brood. The cocoon is usually attached to stones or plants, with a few Hydrophilinae (e.g. Hydrophilus and Hydrochara ) it floats freely in the water. Other genera (e.g. Spercheus and Helochares ) carry it around with them attached to the abdomen of the abdomen until the larvae hatch.

Almost all species have three larval stages, a few species (in the genera Helophorus , Georissus and Sphaeridium ) exceptionally only two. The larval development is usually relatively rapid, usually one to two months. Almost all species in all subfamilies have predatory larvae, while the adults are partly herbivores (phytophag). Many groups that live in manure or wet detritus primarily hunt fly maggots. The larvae are usually elongated with the head stretched forward (prognathic) or slightly tilted downwards. They are usually only slightly sclerotized (especially the abdomen) and often predominantly whitish in color. On the side of the head there are usually five or six button-shaped larval eyes (stemmata or ocelli). The mandibles are redesigned to catch prey and have receded the basal chewing surface (mola) and the mobile, finger-like appendage (prostheca); they are often designed as crescent-shaped and often multi-toothed pincers protruding forward. The larvae also usually have long, four-membered maxillary palps that are as long as the antennae or even a little longer. Most species have relatively long, five-limbed legs, but there are species with partially or completely reduced legs. The abdomen is ten-segment and usually quite elongated, often it is curled secondary by skin folds. At the rear end of the tenth segment sit two usually short, one -parted appendages, the urogomphi (with Helophorus they are long and tripartite), these are sensory organs that warn of enemies approaching from behind. On the sides of the abdomen there are sometimes pointed projections, in the genus Berosus long, thread-like tracheal gills. Usually the first larval stage rises to the surface to take in air. Many hydrophilid larvae have a pair of open stigmas on the abdomen (on the eighth segment), which open into a small, air-filled vestibule (atrium). They usually sit in ambush in the tangle of plants in the area of ​​the water surface, so that they can breathe air through the atrium, but otherwise also breathe submerged through the skin. The larvae of the soil-living Helophorinae, Epimetopinae and Georissinae are all air breathers with open stigmas.

Hydrophilids pupate outside of the water. For this, the last larval stage runs to the bank and digs a small pupal chamber in the leaves or soft soil, in which pupation takes place. The pupae of the hydrophilids are usually white in color with red eyes. They usually have numerous pin-shaped appendages with a bristle at the end, called styli, on the head, torso and abdomen. Their function is probably to prevent too close contact with the ground (with the risk of fungus growth). The number and position of the styli are genre-specific.

Most hydrophilids have one generation per year. In temperate latitudes such as Central Europe, the overwintering stage is usually the beetle (imaginal overwintering).

Way of life and distribution

The way of life of the hydrophilids is quite different depending on the subfamily and also variable within the subfamilies. The following list provides an overview.

It is known from native water beetles that both sexes generate sounds for defense and courtship with stridulation organs by rubbing a stridulation surface on the underside of the wing covers on the sides of a back segment (tergite).

The relationships within the Hydrophilidae family have been extensively researched without any consensus among the various researchers. For this reason, some scientists completely reject an internal structure at this point in time. The most widely accepted hypothesis distinguishes a “helophorid line” from the subfamilies Helophorinae, Georissinae, Hydrochinae and Epimetopinae and a “hydrophilic line” with the subfamilies Hydrophilinae, Sphaeridiinae, Spercheinae, Horelophinae and Horelophopsinae. Both morphological and molecular studies provide clear indications that Sphaeridiinae and Hydrophilinae form a common family group. Of these subfamilies, however, only the Sphaeridiinae themselves are likely to be monophyletic and the Hydrophilinae, compared with them, are paraphyletic. In addition, a very isolated position of the genus Berosus suggests , which would probably not be related to the other Hydrophilinae.