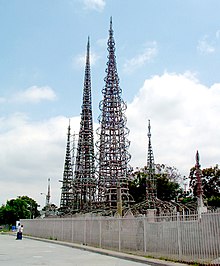 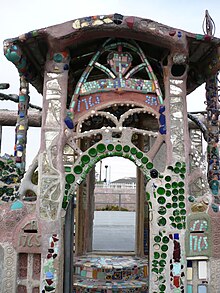 Old glass bottles and old porcelain have been processed at the entrance gate.

The Watts Towers are an example of bizarre architecture in Los Angeles , California .

They were built by the Italian immigrant Sabato "Simon" Rodia (1879-1965) in his spare time in the eponymous district of Watts . He worked on it for 33 years, from 1921 to 1954. The towers are a collection of 17 structures made of scrap, trash and concrete and are 30 meters (99 feet) high at the highest point. The constructions were decorated with sculptures, majolica and small mosaics in the style of the Spanish architect Antoni Gaudí .

On April 13, 1977, the Watts Towers of Simon Rodia were entered as a monument on the National Register of Historic Places . In December 1990, they were granted National Historic Landmark status.

The towers were damaged in the Northridge earthquake in 1994 and were repaired until 2001.

The towers are the location of the showdown of the thriller Ricochet - The Impact and the blaxploitation horror film Dr. Black, Mr. Hyde . They also appear in the films Colors , Menace II Society , Wilder Westen inclusive and La La Land as well as in the Simpsons episodes Angry Dad - The Movie and The Chronicles of Equalia . The towers can also be seen in computer games such as Grand Theft Auto: San Andreas and Grand Theft Auto V.