A displacement sensor is used to measure the distance between an object and a reference point or changes in length . The change in the path is converted into a standard signal or transmitted to the control unit via a fieldbus . Other terms for this are displacement measuring system , displacement transducer , distance sensor , position sensor or distance sensor . This article provides an overview of the functional principles from the field of automation technology ; there are other methods outside of this → see distance measurement . A detailed description can be found in the linked articles.

In contrast to this, proximity switches generate a switching signal when approaching an object.

With an inductive sensor , the inductance of a coil changes. Either the metallic object is measured without contact or a metallic core is moved in the coil with a probe head (plunger armature).

The capacitive sensor consists of two metallic parts isolated from one another. Together with the device under test, it forms a capacitor with variable capacitance . The measuring effect is based on a geometric change in the distance between the two capacitor surfaces or a lateral displacement of these, which leads to a change in the effective capacitor surface. 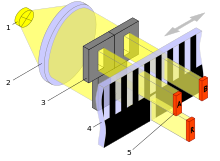 Scheme of a glass scale

The incremental encoder has a periodic measuring standard (lines on glass or metal, magnetization on a magnetic tape, teeth on a rack). The sensor head is guided past it and emits signals that are counted up and down in the evaluation electronics. It only measures the difference to the position after switching on. Absolute encoders have several tracks and immediately show the absolute position.

The resolution can be increased by measuring the intensity of the signals within a graduation period.

Principle of the transit time measurement

The distance is calculated by measuring the time it takes a signal to traverse the measuring section. 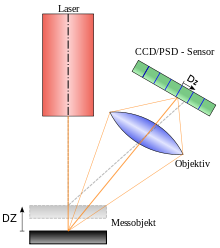 The distance can be calculated by precisely measuring the angle within triangles.

With the conversion into a rotary movement, many angular position encoders can also be used, for example:

Smallest distances e.g. B. in the roughness measurement are optically measured by:

The assignment of the path change to an analog or digital signal and, if necessary, the definition of a zero point is carried out by calibration . For example, a change in travel of 1 mm corresponds to a voltage of 1 V.

In measurement technology , calibration is carried out by calibration laboratories . These are often certified by the German accreditation body .

Distance measurement is used, for example, when operating CNC controls or positioning systems. A strain sensor is used in materials testing or monitoring machines.

Displacement sensors can be used in automation technology e.g. B. can be used for quality assurance and for monitoring a running process . In this way, changes in height, outside diameter, thickness and length of the object can be controlled during the production process. If the corresponding value deviates from the target value, you can intervene in production.