Anyone who lies three times was a TV quiz . The title goes back to the saying : "If you lie once, you won't believe you, even if you speak the truth." The quiz was broadcast in German-speaking countries in the 1970s and 1980s. 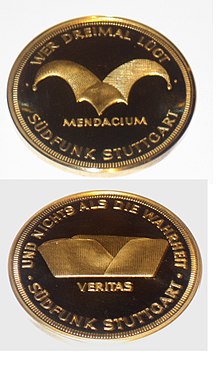 Winner medal for the show Who Lies Three Times

In each episode six short film reports about curious circumstances were shown, three of which were fictitious. The gender-split studio audience had to guess which of the three stories were lies. It was not uncommon for very dubious representations to surprisingly turn out to be real facts. The group with the most hits when identifying invented articles received the so-called “Skeptics Medal” with the words “Veritas” ( Latin for truth) on one side and “Mendacium” ( Latin for lie) on the other.

The show Who Lies Three Times. No quiz for gullible people was broadcast on ARD from August 26, 1970 to 1984 . The 60-minute broadcasts were produced by the then Süddeutscher Rundfunk (SDR) in Stuttgart. The moderators were Harald Scheerer and Wolfgang Spier , directed by Frank Strecker . In December 2016 and January 2017, NDR broadcast four new editions of the program. The moderator was Jürgen von der Lippe , assisted by Annette Frier and Jürgen Vogel .

This show also ran on Swiss television DRS in the mid-1970s. The moderator there was Samuel Scherrer (not related to Harald Scheerer).