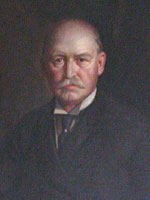 William Lewis Douglas (born August 22, 1845 in Plymouth , Massachusetts , †  September 17, 1924 in Brockton , Massachusetts) was an American businessman and politician . From January 1905 to January 1906 he served as governor of the state of Massachusetts. Douglas was a member of the Democratic Party .

William Douglas attended public schools in his homeland. Then he began an apprenticeship in the shoemaking trade with his uncle. In 1876 he founded his own company in this branch, the WL Douglas Shoe Company , which over the years had 70 branches nationwide. Douglas also briefly took part in the Civil War, but had to give up military service after being wounded.

Douglas was a member of the Massachusetts House of Representatives from 1884 to 1885 and a member of the State Senate in 1887 . In 1890 he became mayor of Brockton, which is also where his company was headquartered. In the years 1884, 1892, 1896 and 1904 he was a delegate at the respective federal party conventions of the Democrats.

On November 8, 1904, William Douglas was elected governor of his state with 52:44 percent of the vote against the Republican incumbent John L. Bates . Between January 5, 1905 and January 4, 1906 he was able to complete a term in this position. During this time, a leprosy station was set up against strong resistance.

After the end of his governor's tenure, Douglas withdrew from politics and returned to his private business. He died in September 1924. He was married twice and had a total of three children.