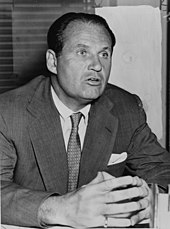 Will Alfred "Bill" Shea (born June 21, 1907 in New York City , New York ; † October 21, 1991 ibid) was an American lawyer who was known for his involvement in the return of National League Baseball to New York after the Brooklyn Dodgers and New York Giants left town for California. The former (until 2009) baseball stadium of the New York Mets , the Shea Stadium in Queens, was named after him.

Shea studied law at Georgetown University and Harvard . He was also a partner in the NFL team Boston Yanks . In 1957 he was asked by New York City Mayor Robert F. Wagner to become chairman of a committee whose task it was to bring the National League back to New York. Shea first tried to bring an existing franchise to New York, but the Cincinnati Reds , Philadelphia Phillies, and Pittsburgh Pirates all turned down the offer. Shea tried to increase the leagues to make room for a new team, but this was also rejected.

In 1959 Shea announced together with Branch Rickey to found a third major league, the Continental League , which was to start playing in 1961. Through this advance Shea was able to get the established leagues, the American League and the National League to agree to an expansion of the leagues if a new league was not formed. In 1961 the American League was expanded to include the Los Angeles Angels and Washington Senators (today: Minnesota Twins ) and in 1962 the National League was expanded to include the New York Mets and the Houston Colt .45s (today: Houston Astros ). After this concession, which brought a National League team to New York, Shea rejected the founding of the Continental League.