Winegrower's house, former bakery and gate system of the Hoflößnitz

The vintner's house, the former bakery and the Hoflößnitz gate are located south below directly on the Hoflößnitz . The property, which is now a listed building , can be found at Lößnitzgrundstraße 19 in the Oberlößnitz district of the Saxon city of Radebeul . It is part of the historic preservation material entity ( Ensemble Protection ) of Hoflößnitz as well as the surrounding listed vineyard landscape of Hoflößnitz as a work of landscape and garden design and this part of the conservation area Historic vineyard landscape Radebeul . A transformer station (block station) also belongs to the protected ensemble. 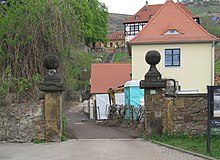 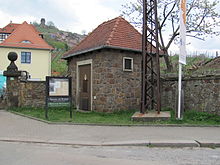 Hoflößnitz 1901: Below in the middle of the street corner is the single-storey gable of the winegrower's house, which is now covered by the front building.

From Lößnitzgrund , on the left at the corner of Lößnitzgrundstrasse / Weinbergstrasse , a stairway begins up to Hoflößnitz. This leads on the valley side through a gate system "as can be found on many wineries in the Lößnitzorte : two sandstone pillars [each] with a square cover plate, on top of which a small square foot, a fluted top and a ball."

To the right of the staircase to Hoflößnitz stands a group of buildings consisting of a winegrower's house and a bakery , built in the first half of the 19th century , above a hooked floor plan. The head building towards the valley is two-storey and has a tiled hipped roof with bat dormers . The windows of the plastered building are framed by sandstone walls, as well as a windowsill cornice on the upper floor . The doors just have suspensions. Further towards the mountain and parallel to the staircase follows a single-storey building with a gable roof and dormers, to which a lower commercial building with a gable roof is connected at right angles to the stairs. In the unplastered sandstone gable, a door leads to the staircase.

On April 15, 2011, the winegrower's house was inaugurated as the Hoflößnitz guest house after its renovation . There are two apartments and four double rooms available.

The transformer station is on the right at the foot of the gate at the entrance to Hoflößnitz. The small building with a high hipped roof in the style of older vineyard architecture was designed and built in 1949 by the Radebeul master builder Gottfried Kintzer at the request of the Radebeul electricity company for the "smooth energy supply for the quarters and casino of the occupying power" .