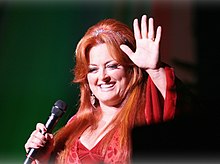 Wynonna Judd at a concert

Wynonna Judd (* thirtieth May 1964 in Ashland , Kentucky ; real name Christina Ciminella ) is an American country - singer that her career center as part of the duo of the 1980s, The Judds began.

Wynonna and her younger sister Ashley were raised from their mother after their parents divorced. The family lived in Los Angeles for a few years before moving back to Kentucky. When Wynonna's singing talent was discovered, the family moved on to Nashville , the heart of country music.

In 1983, mother Naomi Judd and daughter received a record deal from the renowned RCA label. As The Judds , they launched one of the most successful careers in country music history. A total of 14 number 1 hits were recorded and several albums awarded platinum were released. The successful duo was showered with awards. Among other things, they received five Grammys . In 1990 Naomi contracted hepatitis and had to retire from the music business.

Wynonna started her solo career in 1992 with the album Wynonna , of which a total of more than five million copies were sold, equivalent to five times platinum . In addition, three number 1 singles were released. Her next album, Tell me Why , released in 1993 , was also successful and went platinum, as was the album Revelation . The album The Other Side and the video album Her Story: Scenes from a Lifetime went gold.

In 1995 a baby break followed. Since she did not marry her son's father until after he was born, she drew criticism from conservative circles. She was accused of being a bad role model. The marriage ended in divorce in 1997.

In 1996 she reached number one on the country charts again with To Be Loved by You . It was her last major success as a soloist . On New Year's Eve 1999 she performed for the first time with her mother Naomi. In 2000 a joint reunion tour was completed. In 2003 she released another successful album: What the World Needs Now Is Love . In the same year she married her bodyguard. In 2005 she took with Huey Lewis , the duet I'm not in Love Yet on that on the album Plan B by Huey Lewis and the News was published.

The music style of Wynonna Judds is strongly steeped in blues and traditional rock ( roots rock ).