The 380 kV diagonal Berlin (including Berlin 380-kV electric line ) is for the most part as a cable running extra high voltage conduction across the urban area of Berlin . It runs from the northwest through the center of the city and leaves this eastwards. 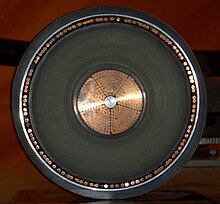 The line carries three-phase alternating current at 380 kilovolts (kV). It consists of two systems with a transmission capacity of 1,100 MVA each and is partly laid as an overhead line , partly as an underground cable or in a tunnel.

The line to the Marzahn substation runs from the city motorway as a 19.8 km long cable. A similarly long high-voltage cable is still available in London with a length of 20 km and on the Vienna networks . One problem is the capacitive load of this line with 2.2 μF. To recharge it at 50 Hz, a reactive current of 160 A must be applied, which corresponds to a reactive power of 110  MVar . This reactive power is applied at the ends by means of compensation coils.

Like the substation at the Reuter power station, the Mitte substation is designed as an encapsulated SF 6 system, i.e. the gas-insulated switchgear is filled with sulfur hexafluoride (SF 6 ) for insulation and could therefore be made smaller than an air-insulated system. Both substations are the oldest 380 kV substations in Germany using SF 6 technology.

The first section from the Reuter substation to the Mitte substation was put into operation in 1978 as the world's first large 380 kilovolt cable connection. On the one hand, it consists of a 2.6 km long overhead line from the Reuter substation to the city ​​motorway at the Rudolf-Wissell Bridge . In this overhead line, all masts are designed as guy masts and plastic insulators were used for the first time ; until then, porcelain insulators were common. Another special feature in the Berlin power system is that the first pole of the 380 kV transmission line from the power plant Reuter-West to the power plant Reuter leads is performed for aesthetic reasons than 66 m tall chimney similar concrete pole with steel lattice trusses.

An 8.1 km long cable route was laid from the city motorway to the Mitte substation. The single-core cables between the Reuter substation and the Mitte substation are designed as paper-insulated low-pressure oil cable systems with a conductor cross-section of 1200 mm² and laid in water-filled fiber cement pipes for cooling . The cables are mostly laid as underground cables. The palace gardens and the Spree are crossed in tunnels.

The connection to the Teufelsbruch substation went into operation on December 7, 1994 with a symbolic push of a button by the then Governing Mayor Eberhard Diepgen , which connected West Berlin to the supra-regional network of VEAG (today 50Hertz Transmission). On September 13, 1995, with the so-called "electrical reunification of Germany", the then VEAG and Bewag network was connected to the Western European network of the then UCPTE.

A 6.3 km long XLPE -insulated 400 kV cable leads from the Mitte substation through an accessible tunnel, which is laid at a depth of up to 30 m and is provided with a monorail suspension system for inspection, to the Friedrichshain substation. This went into operation in 1998. A 5.4 km long XLPE-insulated 400 kV cable also leads from the Friedrichshain substation through a tunnel to the Marzahn substation. This cable went into operation in 2000. This tunnel can also be walked and driven on.

From Marzahn, an overhead line leads to the Neuenhagen substation east of Berlin. After the newly built sections were connected to this line, there has been a bilateral connection of the 380 kV diagonal to the surrounding high voltage network since November 2000.

Due to the increasing generation of regenerative energies in Mecklenburg-Western Pomerania and Brandenburg, the utilization of the line is increasing. In addition, the older sections in the western part are increasingly in need of renovation. For this reason, the operator 50hertz is planning to renew and strengthen the line in the approximately seven-kilometer section from the end of the existing overhead line at the Rudolf-Wissell-Bridge via the transformer station (UW) Charlottenburg to UW Mitte in the coming years. The single-conductor oil cable systems in underground pipes used here are to be replaced by two new cable systems in an accessible and therefore maintenance-friendly tunnel. The current carrying capacity is to increase from the current 1600 to 2500 amperes. Plastic-insulated high-performance cables are then used.

The tunnel to be driven by a tunnel boring machine will have an inside diameter of three meters and will be lined with segments . It should run between 20 and 30 meters below the surface. Four shaft structures will be arranged along the route. A built-in tunnel track allows easy inspection and maintenance. The structure corresponds to the two existing tunnels between the transformer stations in Mitte and Friedrichshain and between Friedrichshain and Marzahn.

A subsoil investigation has already been carried out. The approval process is currently (as of April 2018) running. The actual tunnel construction should begin in 2020 and be completed by the end of 2024. After that two years are estimated for cable installation. The commissioning and integration of the new cable system into the network is planned between 2026 and 2028.

The 380 kV Transversale Berlin is also used to collect practical operating experience of cable systems in the high voltage range. There were repeated longer failures in operation up to 2012. For example, in 2009 the failure of the insulation layer in a cable termination led to an explosive voltage breakdown with fire consequences. The repair work took ten months with this failure. All fault interruptions result in an average availability of 90%, which is low compared to overhead line systems.

Coordinates of the nodes