70 Pine Street (formerly Cities Service Building and American International Building ) is a skyscraper in eastern Lower Manhattan , New York City , which is one of the tallest in the city. The 290 meter high skyscraper was completed in 1932.

With its spire, the building is considered to be one of the most beautiful skyscrapers. 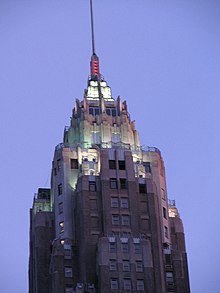 The spire with lighting

Look into the lobby

The spire is illuminated by the sun in the evening 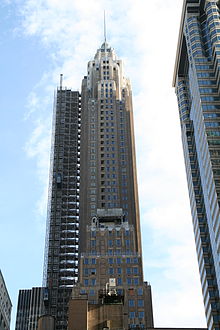 Renovation work on the building in 2014

Current plans envisage converting the building into a residential tower, with the lower floors serving as a hotel. A total of around 700 residential units and 300 hotel rooms are to be built.

There is an observation deck on the 66th floor with an impressive view of Lower Manhattan. The platform used to be accessible to visitors, later only employees in the building had access.

Architecturally, the gradual development of the spire out of the building was rated particularly positively. Here no eccentric crowning has been placed on an otherwise different-looking middle section, but rather an organic connection has been sought. One of the sensational innovations of this tower at the time: The top of the structure is a light cube a good ten meters high. That was something completely different from the previously used lanterns or the beacons. The difference that makes can only be experienced at night.

The shape of the entire building was carved into the stone at one of the entrances.

The building in the film

The building has been featured in a few movies so far: In the movie Spider-Man , the building was moved to Midtown Manhattan for the plot at the end of the film . It can also be seen in the films Armageddon , Independence Day , Aftershock: Earthquake in New York, Team America: World Police and Sky Captain and the World of Tomorrow .