The G3 Series was a series of ConRo ships of the shipping company consortium Atlantic Container Line . The five ships were built in 1984/85 at three different shipyards and used in the shipping company's transatlantic service. They could transport containers as well as RoRo loads and vehicles at the same time . Until the next G4 series was put into service , it was the world's largest unit of this type of ship.

The design of the G3 series was based on experiences with the G1 and G2 ships built in the mid to late 1960s , the requirements of the cargo volume, which has grown significantly in the meantime, and the desire for more economical ship units.

The ships were designed as a versatile ConRo ship with a deckhouse far aft and an ice class . The ships had a ro-ro ramp arranged aft with a load capacity of 420 tons, but no loading gear . 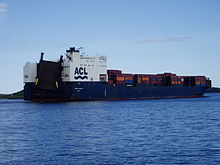 Rear view of the Atlantic Conveyor

When they were built, the ships were divided into two holds , the container and the RoRo area. However, the ships were lengthened by 42 meters as early as 1986/87, with a division into five holds. The container area had cell guides provided by ten and hatches for "lift on / lift off" -Loading accessible. Cell guides were provided on deck for stowing containers. Up to 150 refrigerated containers could also be connected there. The ro-ro area with three height-adjustable decks was loaded and unloaded via the rear ramp.

The ships were powered by a B&W two-stroke diesel engine . When the ships were extended, they were given a more powerful engine. Furthermore, four auxiliary diesels and an emergency diesel generator were available. The berthing and casting off maneuvers were supported by bow and stern thrusters .

The first three ships were built at Kockums in Malmö and started up in 1984, followed in January 1985 by the Atlantic Conveyor built by Swan Hunter in Wallsend and the Atlantic Cartier was delivered significantly late in May 1985.

In order to be able to use the G3 series more profitably, the ships were extended by around 42 meters each in 1987. The Atlantic Conveyor was rebuilt at Scott Lithgow , while the remaining four ships were enlarged by the Hyundai Mipo shipyard in Ulsan. In addition, ACL started a cooperation with Hapag-Lloyd , whereupon the ships of the first generation could also be scrapped. An outward sign of the cooperation with the Hamburg shipping company was the renaming of the Atlantic Companion and Atlantic Concert units to Companion Express and Concert Express . In 1994, the two renamed ships were given their old names, but the slot chartering agreement remained in force.

After more than three decades in the shipping company's transatlantic service, the ships were replaced by the next generation of the ACL G4 series and scrapped between 2015 and 2017.