The joint venture Atlantic Container Line was founded in Stockholm in 1965 by Olof Wallenius to set up a container line service between Europe and the North American east coast (USA / Canada). The background to this development was the fast-growing long-haul container traffic worldwide, with which competitors, such as the container pioneers Sea-Land Corporation or the also newly founded consortium Overseas Containers Limited, purchased large amounts of cargo from conventional general cargo lines. Wallenius Lines (Rederi AB Soya), the Swedish shipping companies Svenska-Amerika Linjen (Broström) and Rederi AB Transatlantic (RABT ) joined forces in order to gain a foothold in the container business, which was new at the time, without having to deal with the large investments involved in the new container ships ) and Holland-Amerika Lijn from the Netherlands to form a consortium. The four partner shipping companies initially commissioned four ships to set up their joint service. In 1966/67, the Cunard Line from Great Britain and the French Compagnie Générale Transatlantique (CGT) joined the consortium, whereupon the consortium's participation was divided into five shares of 20% each, with Broström and Transatlantic sharing one share. The Cunard Line was also involved in another consortium, the Associated Container Transportation (ACT).

The motor ships of the G1 series (S-Type) commissioned in 1965 were delivered in 1967 and could hold around 800 containers. Like all following ACL new buildings were among those ships for the then new type of ship the ConRo ships (container roll on / roll off) - they offered next to parking spaces for container space for vehicles - mostly cars - and trailers. The type ship Atlantic Span started loading operations in Gothenburg on September 4, 1967 and introduced the name tradition that all ship names begin with " Atlantic ..... ". After Cunard and CGT joined the company, the company's headquarters were relocated to Southampton and six more ships, this time larger and faster, were ordered, which were put into service between 1969 and 1970. The six ships of the G2 series (C-Type) had a steam turbine drive and offered around 1200 containers and a large number of motor vehicles. The ACL acted as a time charterer for all ten ships, renting the units from the consortium's member shipping companies. 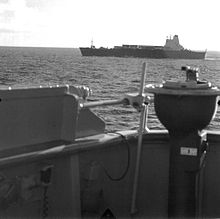 The Atlantic Conveyor on arrival in the Falkland Islands

In the 1970s there were several changes in the operating procedures and in the ownership structure. After the first cargo documentation systems had been introduced in the early 1970s with the Route Code (multimodal information system) and Datafreight Receipt (a type of electronic bill of lading ), ACL began to computerize the ocean freight business on a larger scale in the mid-1970s . In 1974 the CGT merged with the Messageries Maritimes to form the Compagnie Générale Maritime (CGM), whereupon the CGM took over the 20% share in the ACL. On January 1, 1975, Holland-Amerika Lijn left the consortium in order to devote itself entirely to the cruise business. Svenska-Amerika Linjen took over the freight division of HAL and transferred it to the Dutch subsidiary Intercontinental Transport BV (ICT). At the same time, SAL took over the Dutch share in the ACL. Svenska-Amerika Linjen was dissolved in 1978 and the parent company Rederi AB Broström took over their ACL shares and ICT.

In 1976 the four ships of the G1 series were extended, which also increased the container capacity to 1200 TEU. In the same year ACL took over the shipping company Care Line , which had a line to Montreal. In 1978 this service was strengthened by the Mont Royal of SAL, which was renamed Atlantic Premier , the Montmorency of Wallenius, which was incorporated as Atlantic Prelude , and two chartered RoRo newbuildings of the Stena Line , the Atlantic Prosper and Atlantic Project . In 1982, however, the Montreal service ended again. Also in 1982 the shipping company suffered a sad loss. The Atlantic Conveyor was chartered by the Royal Navy during the Falklands War . This was possible because the ship had been brought into the ACL consortium by the Cunard Line in 1970 and was sailing under the British flag. When the ship was in position off the Falkland Islands , it was hit by an Exocet missile from an Argentine fighter plane , caught fire and sank a few days later.

In the early 1980s, the consortium began planning a new generation of ships to replace the first two series of ships - especially the turbine-powered G2 series ships with their high fuel costs. In the end, five considerably larger new buildings were commissioned for delivery in 1984. In 1983 Broström sold half of the shares in its Dutch subsidiary, which later became Incotrans. This sale and the construction contracts for the new ships gave rise to the reallocation of the ACL and the ownership of the units of the G1 series. Wallenius, Cunard, CGM and SAL / Incotrans each received 22.22% of the ACL (the shares of SAL and Incotrans were broken down into 17.22% and 5% respectively), Transatlantic received 11.11%. Cunard took over the Atlantic Star , CGM the Atlantic Span (which was renamed Atlantic Service under the French flag ) and Transatlantic took over part of the Atlantic Saga .

Between 1984 and 1985, Atlantic Container Line put the third generation of its RoRo container ships into service, the five units of the G3 series (C2 type). The ships of this type could hold 2140 containers and 1000 cars. After taking over the new ships, the less than twenty year old turbine ships of the G2 series were sold for demolition. At the same time, Rederi AB Transatlantic (RABT) took over the Broström Group in 1985 and thus also its share in ACL. As early as 1987, the five almost new ships were enlarged, increasing their container capacity to 3100 TEU (G3L series). In addition, ACL started a cooperation with Hapag-Lloyd , whereupon the ships of the first generation could also be scrapped. An outward sign of the cooperation with the Hamburg shipping company was the renaming of the Atlantic Companion and Atlantic Concert units to Companion Express and Concert Express . In 1989 RABT also took over the Wallenius stake in ACL. In 1992, ACL agreed a collaboration with the Mediterranean Shipping Company (MSC), after which ACL withdrew with its own ships from the US west coast and instead took over additional slots on MSC ships. In 1994 the two renamed " Express " ships got their old names back, but the slot chartering agreement with Hapag-Lloyd remained in force.

Further changes to the owner structure

In 1995 and 1996, ACL ended the chartering of the British and French registered ships and Rederi AB Transatlantic bought them from Cunard and Compagnie Générale Maritime, making them the sole owner of the company. The Atlantic Conveyor and Atlantic Cartier were brought under the Bahamian flag, but the remaining three were left under the Swedish flag. ACL moved its headquarters from Southampton to South Plainfield ( United States ) and the name was changed to Atlantic Container Line AB , which made the shipping company shares traded on the Swedish Stock Exchange.

In 2000 the Italian Grimaldi Group ( Grimaldi Lines ) was the main shareholder with 44 percent and later increased this share to 81 percent and currently to 91 percent. Grimaldi Lines is the world's largest operator of RoRo container ships and has significantly improved its market position in the transatlantic business with the takeover of ACL. The ACL services have since been coordinated with those of the Grimaldi Lines. In 2012 five ships of the ACL G4 series were commissioned, which replaced the ships of the G3 series between 2015 and 2017.