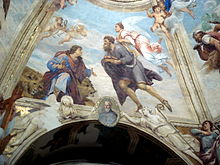 Agostino Scilla (born August 10, 1629 in Messina , † May 31, 1700 in Rome ) was an Italian baroque painter , paleontologist , numismatist and a pioneer in the study of fossils as a geologist .

The son of a government official first studied painting with Antonio Barbalonga . He then went to Rome for four years in the workshop of Andrea Sacchi (1599–1661) and dealt in particular with the art of Raphael and the humanistic ideas of the Renaissance . Back in Messina, he began studying numismatics at the local Accademia della Fucina and researching fossils that he found in Sicily . In his search he was occasionally accompanied by the famous doctor and botanist Paolo Boccone (1633–1704).

At the same time he created paintings and frescoes, the ceiling fresco from 1657 in the Sacrament Chapel Cathedral of Syracuse is considered to be his main work. In addition to paintings of sacred content, some of his still lifes have been preserved, which are in private and public collections.

As a result of the reign of the Spanish Bourbons and the unscrupulous policies of Minister Bernardo Tanucci , riots broke out in Messina between 1672 and 1678, which prompted Scilla to flee to France in 1679 and then to Turin, where he was accepted at the royal court. A short time later he went to Rome, where he was elected to the Accademia di San Luca on October 1, 1679 and to the Congregazione dei Virtuosi on February 10, 1680. He was also the regent of the latter in 1681 and 1685. When he died in Rome, on July 7, 1700, soul masses were read for him on behalf of the Congregation.

The younger brother, the animal painter Giacinto Scilla (d. 1711), the son Saverio Scilla (1673-1748) and Antonio Madiona (active in the 17th century) and others are mentioned as artists from Agostino's school .

The Dorsum Scilla on the Earth's moon is named after him.