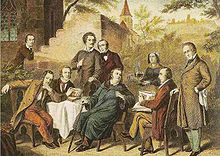 He trained to be a career officer. Then he was a lieutenant colonel in the 3rd Württemberg cavalry regiment. The regiment was stationed in Esslingen am Neckar , where Alexander von Württemberg lived in the Obere Palmsche Palais on the market.

The Serach Castle served as his summer residence . There he met with poets such as Emma Niendorf , Gustav Schwab , Theobald Kerner , Justinus Kerner , Ludwig Uhland and Hermann Kurz . These meetings were also called Serach Poets' Circle .

He had a deep friendship, especially with Nikolaus Lenau , as he shared Weltschmerz and melancholy with him, which shaped his condition from 1832 onwards.

In 1844 he died of a stroke in Wildbad . He was buried in the collegiate church in Stuttgart .

He left behind the lyrical collection Voices of the Time , the incomplete comedy Salvator Rosa in Rome , as well as individual poems and letters to personalities such as Countess Marie von Taubenheim and Carl Christian Friedrich Weckherlin .