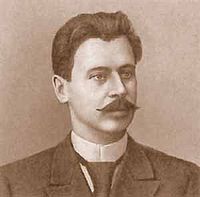 Vvedensky is considered an important Neo-Kantian who worked at the University of Petrograd (today Saint Petersburg). His work (1,2) and others are dedicated to the critical Kantian method of knowledge, which he declared to be the only suitable method. On the other hand, he saw it as his task to further develop the doctrine of Kant while taking into account the scientific knowledge of the 19th century.

He advocated the principle of the a priori of space, time and causality . He stated that " a priori knowledge has a greater degree of certainty than a posteriori knowledge " (1). Furthermore, he was of the opinion “that the principles logically precede experience a priori and function as conditions of its possibility” (1).

He took the position of the unknowability of the soul, which, however, was the source of perceptions. The soul is immortal. Describing mental life with the help of introspection was what he saw as the task of psychology. Vvedensky recognized free will, but also appealed to Divine Providence. Knowing about things would not explain their essence.

The views of Vvedensky within the framework of Neo-Kantianism were criticized by Mikhail Ivanovich Karinsky .