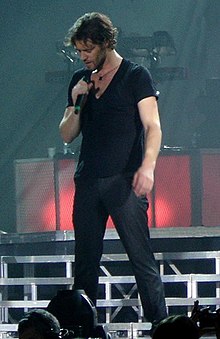 Howard Paul Donald (born April 28, 1968 in Manchester ) is a British singer and member of the boy group Take That, founded in 1990 . In Germany he was also known as a member of the jury for the dance show Got to Dance .

After the band split in February 1996, the members went their separate ways; Robbie Williams had left the band the year before. Things got pretty quiet around Donald in the years after the breakup with Take That. He wrote his own songs and some of them passed on to other artists. In 1996 the singer Kavana published a piece by Donald. In 1999 singer Adam Rickitt recorded two songs that were also written by Donald. Donald also works as a house DJ and has played several times in Germany , including at the Lovestern Galaktika as part of the Love Parade 2002.

In November 2006, Take That started a comeback in Germany after they had previously performed a reunion tour in Great Britain. Since June 20, 2013 Donald was a member of the jury in the dance show Got to Dance on ProSieben and Sat.1 . The show was awarded the Bavarian Television Prize in 2014.

Donald has two daughters from former partners. On January 2, 2015, he married his long-time girlfriend, Katie Halil, who gave birth to a son on January 12, 2016. In February 2017 both became parents of a son again. The family lives in Germany and England.