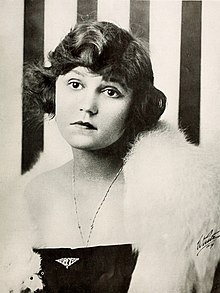 Alice Brady (born November 2, 1892 in New York City , † October 28, 1939 in New York City) was an American theater and film actress who won the Academy Award for Best Supporting Actress in 1938 for her performance in In Old Chicago .

Alice Brady was the daughter of Broadway producer William A. Brady and came into contact with the theater world as a child. Her theater career began in 1911. Between 1914 and 1923 she also appeared in numerous silent films . She celebrated her greatest success as a stage actress in Eugene O'Neill's Mourning Elektra in 1931 . Brady signed a studio contract with MGM in 1933 and made her debut in When Ladies Meet . In the years that followed, Brady was seen in numerous films, mostly as an eccentric lady, including Dance with Me! and twice alongside Deanna Durbin , in 1936 in Three Sweet Girls and the following year in 100 Men and a Girl .

At the 1937 Academy Awards , the actress was nominated for an Academy Award for Best Supporting Actress for her appearance in My Man Godfrey alongside Carole Lombard and William Powell . The following year Brady received the award for In Old Chicago . She embodied the historically documented character of Miss O'Leary, whose cow, according to legend, started the great fire in Chicago in October 1871 . Alice Brady was unable to accept the award in person due to an injury. It was rumored that a fraudster went on stage at the celebration and is said to have received the award, only to disappear undetected afterwards. The actress is said to have received a replacement Oscar later. However, according to other reports, this is a myth. The man who received the Oscar is said to have been the director of the film, who later presented her with the award.

Alice Brady lost her year-long battle with cancer in 1939 at the age of 46. Five months before her death was her last film, the biopic Young Mr. Lincoln by John Ford , in which they had played two murder accused Men's mother, appeared in theaters.