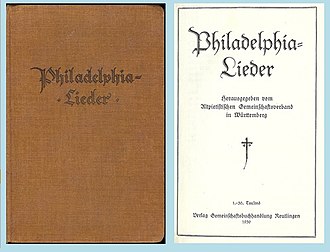 The community association, registered as a registered association , is independently organized and financed exclusively from voluntary contributions and donations. It was founded on March 19, 1857 in Stuttgart, where the seat of the pietistic and evangelical association is to this day .

In around 500 locations in Württemberg and in the Bavarian Allgäu, around 10,000 members of the communities meet every week for Bible studies , house groups and offers for children and young people. The Apis' concern is to keep faith in Jesus Christ alive and to strengthen it. About 60 full-time and well over 1000 volunteer employees work for Apis . A central location of the Apis is the Christian guest center Württemberg " Haus Schönblick " in Schwäbisch Gmünd .

The Old Pietist Community Association published its own hymn books. The Kleine Liederschatz , edited by Christoph König, was published in 1897 ; The Old Pietistic hymnbook followed in 1930 .

There are many annual events, such as the state youth meeting (LaJu) and the Hülben conferences . The parish fair Monday conferences follow an old pietistic tradition of the Hülben village school teacher Jakob Friedrich Kullen (1758–1818), who at the beginning of the 19th century was looking for an alternative to the then rampant Württemberg parish fair. He established the tradition of inviting “young people at risk” on the Monday after the 3rd Sunday in October to listen to God's word, to sing chorales and to strengthen themselves with coffee and “conference bread”. The conference was chaired for the first time in 2015 by Pastor Ulrich Scheffbuch, who also belongs to the Kullen family.

Since 2008, the association has been awarding the Hope Bearer Prize, endowed with 5,000 euros, to people who have been socially committed in a special way “conscious of their responsibility to God and people”. The responsible board of trustees includes the regional synodals Beate Keller, Hartmut Hühnerbein , Martin Scheuermann and Steffen Kern .

The State Brothers Council is the governing body of the Old Pietist Community Association. Pastor Steffen Kern has been the chairman since November 1st, 2008 as the successor to former Rector. D. Otto Schaude.