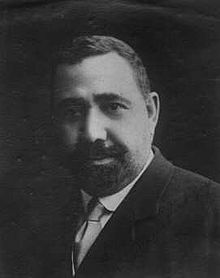 António Joaquim Granjo (born December 27, 1881 in Chaves , † October 19, 1921 in Lisbon ) was a Portuguese lawyer and politician . During the period of the first republic he was head of government of his country twice.

António Granjo had been a staunch Republican since his youth . After the fall of the monarchy , he was elected to the Constituent Assembly in 1911. He fought in World War I and later wrote a book about his wartime experiences.

After the murder of Sidónio Pais (December 14, 1918) he fought the monarchist uprising in Porto under Paiva Couceiro . In 1919 he was elected mayor of his hometown Chaves and in the same year for the Evolutionist Republican Party (PRE - Liberals ) in parliament. He was particularly committed to the unification of his party with the conservative unionists in order to be able to better stand up to the democrats , the dominant force during the first republic. The merger of the two parties was actually carried out in 1919, and the Liberal Republican Party (PLR) was formed, of which Granjo became chairman.

Granjo was Minister of Justice in the government of Domingos Leite Pereira and from July 19 to November 20, 1920, Prime Minister of his country for the first time. During his second term of office from August 30 to October 19, 1921, the tragic events of the Lisbon Blood Night and his assassination fall .

At this point in time, Lisbon was largely under the control of the National Republican Guard ( Guarda Nacional Republicana ), an elite force that was under the control of the government only to a limited extent and was instead led by officers close to the Democrats. After Granjo tried to bring one of the leaders of the Guard, Liberato Ribeiro Pinto , who was also one of his predecessors in the office of Prime Minister, to justice on various incidents, he met with determined opposition from Riberio Pinto. He used the daily O mundo, a Imprensa da Manhã to carry out sharp attacks on Granjo's government on a daily basis. On October 19, soldiers of the National Republican Guard finally banded together, and a junta was formed under the leadership of Captain Manuel Maria Coelho , who declared the government to be deposed. Desperate, Granjo wrote to President de Almeida : “Under these circumstances, the government in Lisbon has no means to offer resistance and defend itself. I therefore place the fate of the government in the hands of Your Excellency ”. De Almeida accepted the resignation of the government, Granjo retired to his private house around two in the afternoon.

In the course of the afternoon and early evening the situation in Lisbon got more and more out of control. Granjo rightly felt threatened and fled to the house of Francisco Pinto da Cunha Leal , a politician friend of his, who he knew enjoyed sympathy among the insurgents. Armed elements broke into da Cunha Leal's home to arrest Granjo, but Granjo was able to stop them. The house was then surrounded by gunmen. Telephone calls for help from the trapped to the leaders of the rebels were unsuccessful. Finally a naval officer appeared and offered to accompany Granjo on board the warship Vasco da Gama, where he was safe. After the officer had given his word of honor that Granjo and da Cunha Leal would not be separated, they finally got into the waiting car, which did not take them to the ship but to the insurgents' headquarters. Cunha Leal and Granjo were separated, Cunha Leal struggled and was seriously injured in a subsequent shootout. Granjo was shot. A soldier of the National Guard stuck a saber in the stomach of the already fatally wounded Prime Minister and exclaimed: “Come to see what color the pig's blood is” (“Venham ver de que cor é o sangue do porco!”).