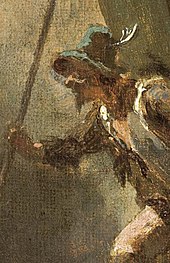 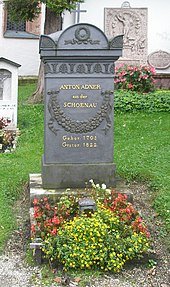 Anton Adner (* allegedly 1705 near Berchtesgaden , according to the tombstone "from Schönau "; † March 15, 1822 ibid) was a peddler and, at the age of 117, the oldest known Bavarian, which is why King Maximilian I looked after him personally from 1817.

Anton Adner manufactured and sold wooden goods well into old age ( Berchtesgadener War ). He transported these products and other merchandise on foot, with a child carrier , even far beyond the Berchtesgadener Land ; he is even said to have knitted clothes for sale himself.

In 1817 the ancient, single peddler met King Maximilian I , who was present at the opening of the brine pipeline between Berchtesgaden and Bad Reichenhall . Thereupon the old man took part in the washing of the feet of Hoffuss in Munich in 1818 and 1819 as an "apostle" and on this occasion climbed the tower of the Frauenkirche on April 9, 1819 . From 1817 Adner lived mainly on an annuity from King Maximilian, who also ensured his medical care, hired a foster family for him and took care of the old man in a touching way.

The book "Character traits and anecdotes as images of goodness and charity from the life of Maximilian Joseph I, King of Bavaria" published in 1827 describes in detail the circumstances of Anton Adner's encounter with the king and the friendship that developed from it:

“A high-ranking civil servant, who became more and more familiar with the inhabitants of these mountains through several broadcasts from the king to these districts, discovered an old male of 112 years named Adner among them. This strange resident was born in the Hanauerschmiede in the judicial district of Berchtoldsgaden in 1705. After he had started to trade in Berchtoldsgadner wares earlier, at the age of one hundred he still carried wooden works and toys from home with the loaded basket on his back over the mountains to Salzburg, Switzerland, Tyrol, Steyermark, Austria and Bavaria. He had been wearing his white cap for thirty and three and his coat for fifty and five. This old man was the man whom that civil servant chose to be worthy of the king's attention, especially at the royal festival of the new opening of the brine pipeline in 1817. The man with his silver hair, small and lean in stature, but still fresh and happy, without any support from a staff, approached the king, who was friendly to him, and described his way of life, his fate and his poverty to the surprised monarch, who was carried away with mercy Thaler immediately gave him a roll, promising that he would remember him ... He took care of it while he was still there. He deigned to decree that from that point in time onwards, at the expense of the royal private money, he would take care of his own supervision in the place of residence, food, care, maintenance and clothing of this old man and that he should lack nothing, whatever for his own good, such as for the maintenance of the He immediately adorned the hat the monarch had given him, according to local custom, with chamois beard and vulture feathers and immediately heard that his most exalted benefactor had chosen him among the 12 apostles of the country for the washing of feet on Maundy Thursday in Munich . "

The same source reports about participation in the washing of feet in Munich:

“When this solemn church festival day, on which the king, according to the ancient custom of the regents of Bavaria, also undertook the washing of feet with the twelve oldest poor men in the state under the most solemn court ceremony in 1818, he let the old man go early enough Pick up Berchtoldsgaden at royal expense and since the way from these border mountains to the residence is quite a long way, take five slow travel stops in a comfortable chaise to Munich ... At the age of one hundred and thirteen the old mountain man walked with his other eleven companions to the court and to the church with a cheerfulness and swiftness as if he were a youth among the others. During his stay he wandered the streets happily and with good cheer, watched the parade of the guard, and even went to the court theater once at the invitation of the king, where, seeing a theater for the first time in his life, he was strangely astonished. Every year at the apostles' feast he was received with equal grace from the king .... "

The book also records the circumstances of Anton Adner's death:

“In 1820 he saw the king, his benefactor, for the last time in Berchtoldsgaden. The forces finally succumbed to the power of nature and the will of the Lord. When he went to church in his daily habit in the winter of 1822, he sank to the ground with a sudden dizziness. Loved and respected by all residents, he immediately received all help and assistance. In spite of the most recognizable symptoms of dropsy, the patient was always in a good mood and often spoke with emotion of the king who had recently sent him tableware and fine cutlery as a present. When, after a month, he felt that the end of his life was approaching, he got up from the bed and prayed with devotion in the presence of the bystanders for the king and his house, then he thanked him with touching words and with tears for the benevolent benefits he took Finally, farewell to all his friends and those present, and looked forward to the hour of death, which called him to God his Lord even after an illness of 21 days, in the hundred and seventeenth year of his life. Not only in Berchtoldsgaden, but far and wide in the huts in the mountains and valleys, everyone regretted the loss of the nicest of his fellow citizens, so the funeral ceremony was quite extraordinary. Not only the entire clergy, all officials and community leaders, but also the elders of the communities along with thousands of residents from the mountains and the Alps accompanied the corpse to the grave and attended the ministry the next day. Even the children wept for him, because he became a child among them, joked with them and always had children around him on his walks ... "

King Maximilian I decreed that Adner's legacy should be divided among the poor in the village, and presented the Zechmeister couple, who had cared for him on his behalf, with a precious emerald ring (for the woman) or a solid silver knife set , wearing the royal name and coat of arms (for the man).

The monarch also decreed that Anton Adner should receive a beautiful grave monument, which his son, King Ludwig I, later had executed. The inscription read: "A cheerful end to his long life, the largest part of which he spent traveling as a second-hand seller with Berchtoldsgadener goods, the benefits of the king granted him". The cast-iron tomb, created by royal favor, still adorns the Old Cemetery next to the Franciscan Church in Berchtesgaden and is right behind the main entrance.

Carl Spitzweg , who still knew Adner as a boy, immortalized him in one of his most famous pictures, The Carrier in the Gorge . Johann Christoph Erhard portrayed the 113-year-old Adner on August 24, 1818 in his room in Berchtesgaden. The pencil drawing went to Johann David Passavant and is now in the Städel Museum's graphic collection .