Belgian International Air Services ( BIAS for short) was a Belgian airline that operated international charter flights and cargo transport. In addition, she rented her planes to other airlines. The company stopped its own flight operations in the spring of 1973 and then remained active in the leasing business. The leasing company was dissolved in 1980.

Belgian International Air Services ( BIAS ), based in Antwerp , was founded on July 1, 1959 by entrepreneur Charles Van Antwerp. The company's first aircraft was a Douglas DC-4 . Operations began on July 7, 1959 with a charter flight from Antwerp to London Gatwick . In December 1959, BIAS acquired another Douglas DC-4. Both aircraft were transferred to the Republic of the Congo in 1961 and used there for a long time on behalf of the UN and the airline Air Congo . The Republic of the Congo also used a Douglas DC-4 as a government aircraft in 1965. In March 1963, BIAS leased its first Douglas DC-6 from the Belgian airline Sabena . By the mid-1960s, the company put four more aircraft of this type into service. Belgian International Air Services used the aircraft for occasional services (ad hoc charter) and freight transports within Europe. At times, the aircraft were also leased to other companies, including the Swiss company Balair .

In July 1965 acquired BIAS one investments in the Libyan Libyan National Airways (short Linair ) and seven machines of the type Douglas DC-3 , which Sabena previously for Linair had operated. These aircraft were rented out to the Libyan subsidiary on a long-term basis and used in cargo charter for the oil industry. In addition, the company leased a De Havilland DH.104 Dove from 1967 and a Fokker F-27 from 1968 to Linair .

From August 28, 1967, scheduled flights were made on behalf of Sabena with a De Havilland DH.114 Heron between Rotterdam and Eindhoven . From 1968 to 1972 BIAS used Fokker F-27s for Sabena , which were then leased to them on a long-term basis. In March 1971, the company acquired a Sud Aviation Caravelle jet aircraft from United Air Lines in order to take up tourist charter flights (IT charter). At the same time, the last self-used propeller aircraft were decommissioned.

At the beginning of 1972 the shipping company Compagnie Maritime Belge bought the company . The Sud Aviation Caravelle was sold at the same time and replaced by two Douglas DC-8s acquired by KLM , which were used on charter flights to the Mediterranean in the summer of 1972 under the new company name BIAS International . The Compagnie Maritime Belge also took a majority stake in the Belgian Delta Air Transport ( DAT ) in February 1973 and redefined the areas of responsibility of the two airlines: While Delta Air Transport remained as an airline, BIAS International was converted into a leasing company. In the spring of 1973 the company ceded its two remaining Douglas DC-8s to DAT and ceased its own flight operations.

After the flight operations were stopped, BIAS International remained as a leasing company, but did not acquire any new aircraft in the period that followed. Between 1974 and 1976 the company operated under the name BIAS Overseas . The leasing contracts with Sabena and the Libyan Linair expired in the mid-1970s. The company was then able to rent a Fokker F-27 to the French Air Alpes for five years . After this contract expired, the company was dissolved in 1980. 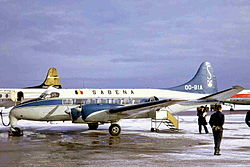 A De Havilland DH.114 Heron from BIAS operated for Sabena .

In the course of its history the company operated the following types of aircraft: