Bernhard Severin Ingemann (born May 28, 1789 in Thorkildstrup on the island of Falster , † February 24, 1862 in Sorø ) was a Danish writer . His poetry was created under the influence of German Romanticism. Historical novels based on Walter Scott followed. Deeply religious poems then predominated in Ingemann's late work.

As such, he was traveling in Germany and Italy in 1818/1819. The literary result of this trip was found in his works Reiselyren (1820) and Julegave (1826). In addition to short stories and poems, Ingemann found more and more a focus in dramatic works; z. B. Reinald Underbarnet , Masaniello or Bianca . 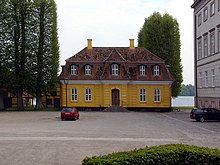 In 1822 Ingemann got a job as a lecturer at the Academy in Sorø and between 1843 and 1849 he was director of this academy. Ingemann wrote several satires on the side, so to speak . At the same time he published a number of lyrical-epic poems, such as Helias og Beatrice (1816) and De Unterjordiske (1817).

With the epic Valdemar den Store og hans Mænd (1824) Ingemann began a series of historical works in which - according to his own statement, influenced by Sir Walter Scott - he traced the history of his country in many facets. The cycle Valdemar Seier (1826), Erik Menveds Barndom (1828), Kong Erik og de Fredløse (1833) and Prinds Otto of Danmark (1835) should also be mentioned here. Ingemann's romances cycle Holger Danske (1837), which is considered to be one of his most successful poems, became just as well known as his historical works .

Ingemann's collection of psalms, Høimessepsalmer (1825), and Tankebreve fra en Afdød ( Thoughts in the Letters of a Deceased , 1855), in which he explains his religious point of view, should be mentioned among his writings with a religious content .

Ingemann wrote the lyrics to one of the most popular Danish Christmas carols: “Dejlig er jorden! Mark he Guds heaven! Skøn er sjælenes pilgrimsgang… “(Wonderful is the earth! God's heaven is splendid! The pilgrimage of souls is beautiful! Through the beautiful kingdoms on earth we go to paradise with song! / Times will come, times should fade, gender should go with the walk follow the generations: the sound of heaven never falls silent in the pilgrimage of happy souls. / The angels first sang it for the shepherds in the field, it sounded beautifully from soul to soul: Peace on earth! Man, rejoice: an eternal Redeemer has been born to us .) The song text was first printed in the Danish church newspaper Dansk Kirketidende in 1850 and provided with a melody “from Silesia”. The song is in numerous Danish utility song books with different indications (e.g. "German folk melody"). However, the correct information accepted is “Ingemann, 1850 / Melodie Silesian, 18th century” (e.g. in the Danish folk high school hymn book Folkehøjskolens sangbog , 16th edition, 1986, no. 129; also Højskolesangbogen , 18th edition, 2011, no. 72).

The song plays a role in a novel by Herman Bang : Herman Bang, The White House. The gray house , translated from Danish by Walter Boehlich [Frankfurt / Main 1978] insel taschenbuch 2007, p. 13, p. 38 f .: “The earth is beautiful, God's heaven is glorious, the pilgrimage of souls is beautiful. / Through the beautiful kingdoms on earth we go to paradise with singing. "The translator W. Boehlich writes in the afterword, p. 303 f.," You have to read over the many poems. Lyric perfection lies in Bang's prose, not in his verse, and rarely in the verse of others that he has interspersed. They are a stylistic principle for him, but not a happy one. ”Boehlich refers [without further details] to verses by Paludan-Müller, Christian Winther and Henrik Hertz, but not to the fact that“ Dejlig er jorden… ”a popular and highly valued Danish song by Ingemann is.