The howler monkeys ( Alouatta ) are a genus of primate from the family of spotted monkeys (Atelidae). They live in Central and South America and are known for their loud screams, which they utter mostly in the early morning. They feed on leaves and other plant material. The genus includes eleven or twelve species . 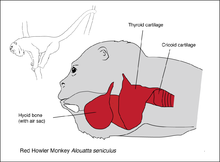 Larynx of a howler monkey

Howler monkeys are among the largest New World monkeys after the spider monkeys . They reach a head body length of 60 to 90 centimeters, the tail becomes just as long. The weight is 4 to 10 kilograms. There is a pronounced sexual dimorphism in terms of size - the males are always significantly heavier than the females - and in the case of the black howler monkey also in terms of coat color. The face is hairless and dark, the mouth and throat area is developed for loud screams: the hyoid bone ( os hyoideum ) and thyroid cartilage ( cartilago thyroidea ) of the larynx are greatly enlarged and there is a protrusion of the interior of the larynx ( ventriculus laryngis ). The fur is rough and mostly long, its color ranges from yellow-brown to red to black, which depends on the species, age and sex, but can also vary individually. The long tail is hairless in the rear part on the underside, it is designed as a prehensile tail. The limbs are relatively long and strong, arms and legs are about the same length. The thumb is weak, but unlike related species, it is present.

In the howler monkeys, a parallel evolution to the Old World monkeys (here it happened 23 million years ago) was the only group among the New World monkeys to develop trichromatic color vision (7 to 16 million years ago) through a gene duplication of the second on the X chromosome Opsin gene. Here, too, the ability to see more colors was accompanied by a loss of intact olfactory cells; the more pronounced the color vision, the more likely the sense of smell lost its importance.

Howler monkeys live on the American continent , from southern Mexico over the Amazon basin to northern Argentina . The individual species are largely allopatric , which means that their areas of distribution do not overlap. These primates are forest dwellers, but occur in a wide variety of forest types. They can be found in tropical rainforests as well as in dry, deciduous forests , in mountain forests up to 3200 meters above sea level and even in the savanna-like Cerrado landscape.

Howler monkeys are diurnal tree dwellers, but sometimes come to the ground. They are skilled climbers, even if their movements are rather slow. The pronging tail is used as the fifth hand and is so strong that the animals can catch themselves with their tails after jumping off a branch. Often, males and females occupy different parts of the trees: while males are in the treetops, females tend to be in the lower parts. Like many other leaf eaters, they have to compensate for the low nutritional value of their food with long periods of rest.

They live together in groups that usually contain five to twenty animals and consist of one or more sexually mature males and several females. However, the older males ensure that the male-female ratio does not drop below 1: 3 to 1: 4, otherwise subordinate or young males will be chased away. Within the group there is a strict hierarchy among the males, fights among each other and the killing of young animals are not uncommon. After they have grown up, most of the young animals leave their family group, presumably because they would have no chance there within the group hierarchy. Territorial behavior is not very pronounced, territories of different groups can overlap over a large area, only the core area is defended and indicated with roars.

Howler monkeys get their name from the loud roar of the animals, which both sexes emit and which can be heard over several kilometers. The roar is mainly used for communication between different groups. All the males in the group join in, together with the roar of response from other animals, a loud spectacle ensues. Howler monkeys use it to make their presence clear to warn other groups of their core area. Energy-intensive fights - since the howler monkeys are leaf eaters, they have to manage their energy - can be avoided in this way. A second reason for the roar can be that individual animals seek connection to a group - migration among the groups is relatively high - and signal their presence through their shouting and in this way receive an answer as to whether they are welcome or not. The roar is usually heard in the morning, if necessary at other times of the day.

Howler monkeys are pure herbivores . Their main food is leaves, which make up 52 to 77% of their annual diet. In addition, they eat fruits and flowers that vary according to the season. Occasionally they come to the ground to drink or eat soil .

Births can take place all year round; there is no evidence of seasonal fluctuations in the number of births. In the coat howler monkey, the female approaches the males and indicates their willingness to mate with rhythmic tongue movements. If the male also responds with tongue movements, the female turns and raises her pelvis, whereupon the male begins copulation.

All species have a gestation period of around six months (180 to 190 days) and usually only one young is born. At first it clings to the mother's belly, later it rides on her back. According to research, 44% of all juvenile deaths are due to killing by older males in the group. The other, mostly childless females in the group also take care of the young animals, and the father also lets them ride on his back. Young animals are weaned at around ten months; Females are sexually mature after three to four years, males after five years. However, it usually takes several more years for the males to have climbed up the hierarchy enough to be able to produce offspring.

The average life expectancy is around 16 years, in captivity animals have lived to be over 20 years old.

Distribution area of ​​the howler monkey

The natural enemies of howler monkeys include big cats such as the ocelot or the long-tailed cat and birds of prey such as the harpy . The deforestation of many forests has meant that the habitat of the howler monkeys is now often reduced and fragmented. Hunting plays a subordinate role. However, due to their adaptability and their small territories, howler monkeys can cope better with reduced habitats than many other American primates and are less endangered.

The howler monkeys are part of the family of spider-tailed monkeys (Atelidae), which are characterized, among other things, by the prehensile tail. Within the bracket-tailed monkeys, they are considered the basal group and sister taxon of the other representatives.

The genus of howler monkeys is divided into eleven or twelve species.