This article deals with the ridge near Basel. For the Basel residential area of ​​the same name, see Basel-Bruderholz .

The Bruderholz is a plateau in the two half-cantons of Basel-Stadt and Basel-Landschaft in Switzerland .

The name is derived from the forest brothers n ( hermits ), who used to live in small strips of wood and woods on the steep slopes of the Bruderholz. 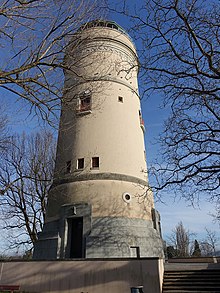 The water tower on the Bruderholz

The Bruderholz runs in a northeast-southwest direction and separates the Birstal from the Leimental . The gentle ridge belongs to the Sundgau hills and rises to a height of 391 meters, i.e. more than 100 meters above the neighboring valleys. It is slightly wavy and rises slightly towards the south. The Buremichelskopf forms a prominent point at 363 meters, northwest of the Bruderholz water tower . The Bruderholz is cultivated in the north. The Basel Bruderholz quarter and the Basel- Landschaft Bruderholz Hospital are also located there .

The subsoil and the valley floor consists of Cyrene marl ( Blue Latvian / Oligocene ) from the Tertiary . Above it there is gravel (partly Nagelfluh ) and, as a top layer, fine, yellowish dust, the loess / loess clay from the Ice Age ( Diluvium ). This surface layer is very fertile, and therefore rich fields and lush meadows extend on the plateau. In addition, the Bruderholz is one of the popular local recreation areas in Basel.

On March 22nd, 1499, the battle on the Bruderholz between the Swabians and the Confederates during the Swabian War took place here .

From 1792 the border between France and Switzerland ran over the Bruderholz, after the Congress of Vienna in 1815 it was awarded to Switzerland.

In 1815 a ski jump , called a battery , was built in the urban area and in 1926 the Bruderholz water tower, which can be seen from afar, was built nearby.

Panoramic view from the water tower to the Bruderholz hospital, Schanze.