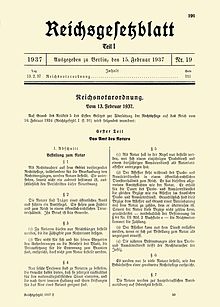 The Federal Notarial Code ( BNotO ) regulates the official activities of notaries across the country and contains legal provisions on the appointment of notaries, the exercise of office, notarial duties, the rules for the absence and prevention of a notary, notary representatives and notary administrators (formerly notary administrators), and also about the institution and the tasks of the Federal Chamber of Notaries and the State Chamber of Notaries and the disciplinary procedure for notaries.

Due to the special design of the notary's office in the former Baden , the BNotO did not apply in the Karlsruhe Higher Regional Court district until 2009 in accordance with Section 115 sentence 1 BNotO . In 2009, the paragraph was dropped, and the application process for lawyer notaries was reorganized. This was preceded, among other things, by the Tired Theses .

An important official duty of notaries is regulated in § 32 BNotO. According to § 32 BNotO, notaries have to “hold” the Federal Law Gazette , the Law and Ordinance Gazette of the relevant federal state in which the notary's office is based and the information sheet of the state justice administration. Originally, this meant the purchase and availability of the paper editions of the announcement sheets mentioned. In 2003, however, the Federal Chamber of Notaries already stipulated in a circular that the electronic purchase of the corresponding announcement sheets can also meet the requirements of Section 32 BNotO if it is guaranteed that the notary can save the announcement sheets and keep them permanently available in electronic form.

The regulation of § 5 BNotO, according to which a notary in Germany must be a German citizen, was declared illegal by the ECJ on May 24, 2011 .

On February 13, 1937, the National Socialists formally put the so-called Reich Notarial Order into force. It was a racist professional code that is part of the numerous provisions issued by the National Socialists against the Jewish minority since 1933 , by formulating an apparently biological exclusion criterion as a further requirement for professional practice in Paragraph 3:

Section 3 (2) Anyone who does not meet the requirements for blood purity for himself and his spouse may not be appointed as a notary.

The profession is defined therein as an office whose holder owes loyalty to the leader. It is not a trade. (both in § 2)