The Federal Association for Self-Protection (BVS) was a federal corporation under public law with the capacity to serve as an employer . The BVS was based in Cologne . 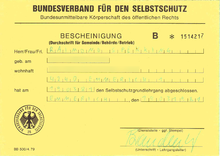 Certificate for participation in a self-protection course, carried out by the Federal Association for Self-Protection, 1981

The association was divided into the federal headquarters, the state offices, the local offices and schools. Members of the BVS were the federal government , the federal states , the municipal associations and other bodies. It was headed by a board of directors made up of a president and an executive director. While the president was doing voluntary work, the director was a temporary civil servant and the superior of all civil servants , employees and workers of the BVS. 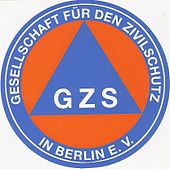 In West Berlin , due to its four-power status, the Society for Civil Protection eV (GZS) was active, as the recipient of federal funding, with an honorary board of directors, a full-time managing director and full-time and honorary employees, the training tasks of both the Federal Office for Civil Protection and of the BVS. In addition, she was temporarily responsible for the maintenance and monitoring of the shelters in the western part of the city.

Mobile exhibition "Our Self-Protection" of the BLSV in Kiel (1963)

In the BVS, many volunteers were involved as specialist teachers or self-protection helpers, particularly for self-protection training for young people and for providing information to broad sections of the population. The BVS had the task of educating the citizens about self-protection measures in crises, disasters and in case of defense . This included, for example, information about fire protection, the rescue and rescue of those affected, the storage of food or the construction of shelters in private properties. The BVS had five schools of its own, in which self-protection courses were held primarily for government employees. The practical extinguishing or rescue exercises for the disaster control trains of the Deutsche Bundespost played a large part . In addition, the BVS carried out basic self-protection courses at local level, imparting basic knowledge in the areas of fire protection, rescue and medical services.

For many years the BVS published the civil protection magazine, in which the large German disaster protection organizations were also found.

In some telephone books or in the AVON there were instructions and rules of conduct for self-protection.