Decontamination - workplace of the lock commander 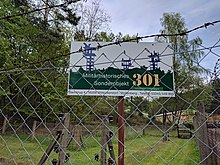 Information board at the entrance

The Wollenberg bunker is a bunker facility near Bad Freienwalde (Oder) in Brandenburg . It protected the military tropospheric radio control center 301, one of three identical systems that were built in the GDR in the mid-1980s. The other two systems were the troposphere radio center 302 ( bunker Eichenthal ) in the municipality of Langsdorf near Bad Sülze and the tropospheric radio center 303 in Röhrsdorf near Königsbrück . The systems belonged to the strategic tropospheric communication system "BARS" (Leopard) of the participating states of the Warsaw Pact . The technical zone of the systems consisted of a two-storey bunker, classified in protection class D according to VA classification and the basic dimensions of approx. 30 × 30 m. The Class  D corresponded to the pressure of a nuclear weapon detonation of 30 N / cm², so that arms approximately to the action of a concrete breaking bomb of 250 kg explosives . The legend of the facility was its alleged use as a military aviation weather station.

Pressure door and a view of the access tunnel

With their affiliation to the tropospheric intelligence system "BARS", the stations belonged to the inventory of the Uniform Information System (ENS) of the countries participating in the Warsaw Pact. In the national context, they were referred to as support message centers 301–303 (StNZ) and were included as such in the secretly prepared NVA message system. With these names a camouflage legend was given. With the assignment of tactical cover names, for Wollenberg as "TUSHURKA", a further concealment was achieved.

The troposphere radio center 301 was designed, built and prepared for the reception of four tropospheric radio sets, which means that it can establish tropospheric radio links in four different directions. In fact, only three sets of equipment were installed. Each allowed the production of 60 tropospheric radio channels. From the total number of channels, the tropospheric radio station 301 was able to switch up to 48 operational channels to the main control center of the Ministry for National Defense of the GDR in the Harnekop bunker via telecommunication cables or radio sets FM 24-400 (frequency modulation). The relaying and transfer of channels was the subject of qualification measures in the usage phase of the system according to program times and as part of international switching exercises. From the main news center of the MfNV , the first operational news channels were switched and operated abroad as reserve WTsch government connections via the tropospheric radio station 301 in May 1990 .

The propagation of electromagnetic waves in the tropospheric radio system is based on the use of the properties of the troposphere (area of ​​weather, 12-17 kilometers), where they form a field of radiation encounter. This creates a volume of scattered radiation that causes parts of the homogeneous atmosphere to vibrate in relation to the wavelengths, which propagate in the direction of the counterparts ( troposcatter ). After a nuclear weapon detonation , the troposphere is enriched with additional dirt and dust particles. H. also the field of the radiation encounter, which leads to an increase in the oscillation movement and thus to an increase in the field strength of the signals and to an improvement in the quality of the connection. In connection with the propagation conditions of electromagnetic waves, the field of the scattered radiation encounter is often referred to as the “reflector layer”. In terms of area, the tropospheric radio station took up an area of ​​around 10 ha.

The bunker has been privatized and is being used by the local association “Military historical special object 301 Wollenberg e. V. "operated. In countless missions, supported by friends and specialist staff, the club members have not only made the bunker accessible to the public from a state of devastation. All above-ground objects have also been reconstructed , the rooms have been partially restored to their original state and prepared and used for the presentation of military clothing and equipment and small intelligence equipment of the NVA . The protected garage complex with its forecourt, once built for mobile reserve antenna technology, is the center of the presentation of restored mobile communications equipment sets of the NVA on various roadworthy vehicle bases . The transmitting , receiving and power supply vehicle of a mobile tropospheric radio complex of the type R 417 BAGET, which was only introduced into the NVA in 1990, is based on a " KAMAZ " (Russian model).

The complex is entered in the list of monuments of the state of Brandenburg. With its public tours, the association commemorates the Cold War in Europe. Visitors experience the bunker as if it had never gone out of service. The Imitation of system states of the devices, the noise of useful - and noise in the radio channels of shortwave - radio station by radio amateurs and the qualitative details of the idea of the bunker and the explanations on function and purpose are intended to give a realistic impression of the plant to the visitors.