Coats of arms of the connections in the Burschenbunds-Convent (1931)

The Burschenbunds-Convent was an amalgamation of color-bearing associations that followed liberal and liberal ideals. Most of these associations were founded in the 1870s (1875 Alemannia Prague, 1876 Fidelitas Vienna, 1878 Alemannia Breslau, 1879 Ghibellinia Berlin). It was the answer to anti-Semitism after the establishment of the German Reich and later to increasing racial anti-Semitism. 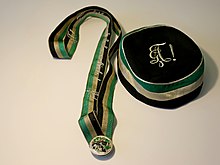 In Austria, the nationalist, anti-Semitic corporations referred to themselves as the Burschenbund. Therefore, the BC corporations kept their name “fraternity”. The recourse to the ideals of the primitive fraternity mainly related to the demand for a democratic social order. The members of the BC were often "assimilated Jews", but also religiously practicing Jews and Christian liberal German students. Out of their own conviction, they aligned themselves nationally with Germany on the soil of the Weimar Republic. They did not want to compete with the patriotism of right-wing corporations.

The frets stood not only for the color and scale , but also for absolute satisfaction . Students of German mother tongue who professed the principle of tolerance were accepted . Other criteria such as nation or religion did not play a role. Supporters of communism or national socialism were not accepted. The motto was: "For Germanness, freedom, justice and honor." The association colors were the colors of the original fraternity , black and red (vu) with a golden border. The BC belonged to neither the German student body nor the German student association. As a badge, the members of the BC-Bund wore a pin with a small silver ring in the right corner of the lapel.

On the initiative of Justice Councilor Hugo Straßmann (1859-1930, Alemannia Breslau), the Burschenbunds-Convent (BC) was founded on August 31, 1919 by Reich German student associations. On June 27, 1920, the association reached beyond the borders of the Reich for the first time with the admission of Viennese fraternities. The Sudeten German corporations founded the Sudeten German Burschenbunds-Convent on June 25, 1921 . The Brno and Prague corporations were equal in BC and were recognized as individual members on December 21, 1926. While the Imperial German federation corporations uniformly adopted the designation "Burschenbund", the Viennese and Sudeten German corporations retained the traditional designation "Burschenschaft". In the mid-twenties, the BC comprised 1,300 to 1,800 members.

The medical councilor Richard Friedländer of the Berliner Burschenbunds Ghibellinia was publisher, later also editor, of the German university . In 1925 the Senior Men’s Committee published a BC songbook . The binding was decorated with the circles of the BC-frets. In 1929 a directory of the old gentlemen was organized according to residence, occupation and corporation. The fiscal year was the calendar year. Dresden (Prusso-Saxonia) was the suburb for 1930. The first chairman was lawyer Dr. Wertheimer (Wirceburgia). The office was in the Tempelhof district , Viktoriastr. 8th.

In the strict rejection of the anti-Semitic and National Socialist views, which were widespread in other student associations in the 1920s, the BC invoked the ideals of the original fraternity of 1815. Despite its openness to all religions, the BC was widely regarded in arms student circles as " Jewish"; its members were for the most part regarded as not capable of satisfaction (see also: Waidhofen principle ). There was also a long-term feud with the German-national cartel convention (KC), which only accepted Jews.

“Although the members ... were predominantly Jews or students of Jewish descent, they refused to be labeled a Jewish association. These students represented an assimilated Judaism that did not want to be outdone by right-wing corporations in terms of patriotism, but at the same time demonstrated its support for Weimar democracy through membership in the German Student Union. "

- Michael Grüttner : The student body in democracy and dictatorship.

Numerous old men of the Burschenbunds-Convent were members of the Reich Banner Black-Red-Gold .

The Burschenbunds-Convent was founded on August 31, 1919 in Berlin by ten previously free corporations:

Before the Nazi era , BC had 22 connections. At the end of the summer semester of 1933, all of the Reich German BC leagues were suspended . In Prague, active operations were partially maintained until 1938.

The BC reconstituted on June 27, 1953 as the old gentlemen's association, which belonged to the Convent of German Academic Associations (CDA). The BC was reconstituted as an optional beating association. In 1965 he still had three connections (one in Marburg, two in Munich) with a total of 1000 members.

In 1974 the number of old men had dropped to 250. In the early 1980s, the BC ceased to exist. The BC AHV still exists as a registered association, but no longer has any business activities. He still conducts the formal conventions . The chairmen of today's BC are members of the AHV Alsatia-Thuringia. At the annual meeting of the BC members come on since 2017 Corpshaus the Hasso Nassovia together. 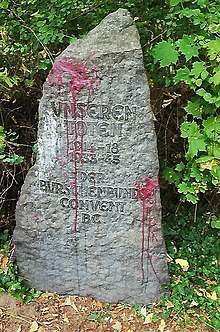 When Marburg Castle a monument to the fallen, persecuted and murdered in the Holocaust members of the lads League-Convents recalls. Old men set it up in 1964 by the watchtower in the park west of the Landgrave's Palace: 1914–1918 and 1933–1945 . A hanging beech was planted next to it.