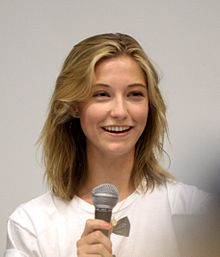 In Los Angeles -born Caitlin Gerard visited during her childhood the Lycee International of Los Angeles . She graduated from Malibu High School in 2006. In addition to her native English , she speaks fluent German and French . She later attended UCLA , where her majors were English and creative writing . She has also appeared in advertising campaigns for Abercrombie & Fitch , Hollister , Coca-Cola , Burger King and Pizza Hut .

Caitlin Gerard had her first film role in 2010 on The Social Network as Ashleigh . In the same year the films The Awakening and Answers to Nothing followed . After the YouTube -series January and Vanessa & Jan as January held her first leading role, she was in 2013 next to Bo Burnham in the MTV - sitcom Zach Stone Is Gonna Be Famous in the role of Amy to see.