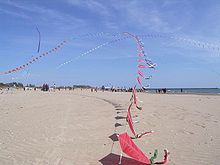 The beach of Cap d'Agde 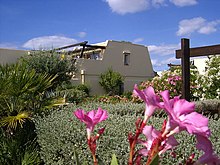 The villa complex of the naturist center in Cap d'Agde

Cardinal Richelieu originally planned Cap d'Agde to be the port of Agde .

In 1939, the Camp d'Agde internment camp was set up to accommodate around 25,000 supporters and fighters of the defeated Republican government of the Spanish Civil War . A communal campsite was opened on July 1, 1961 on the same site. Cap d'Agde developed into a popular holiday resort in the two decades around the turn of the millennium.

Cap d'Agde consists of ten districts , each with its own style (atmosphere, architecture and way of life). It has seven sandy beaches and offers water sports such as diving , surfing , jet skiing , canoeing, kayaking , motor boating , water skiing , sailing and paragliding , as well as facilities for tennis , golf , horse riding , archery and squash . The evening entertainment is provided by cinemas , theaters and concerts in the convention center, as well as discos and nightclubs .

The seaside resort is characterized by tourism throughout the season. Out of season, Cap d'Agde becomes a quiet place where you can relax and unwind on the coast. The beaches are long (about 14 kilometers in total), wide, safe (especially Plage Richelieu) and often surrounded by hiking trails. The sea water in Cap d'Agde is of good quality, as the current at the tip of the cape ensures a constant exchange of water. Parallel to the beaches there are neither spa promenade nor streets, but dunes, lawns, playgrounds and small footpaths. On the one hand there are kilometers of fine sandy beaches in Cap d'Agde, on the other hand there are also the basalt cliffs of Cape Agde with the offshore island of Fort Brescou . The old walls of this island once served as a prison and can now be approached and viewed by boat.

Since 1987, the ports of Le Cap d'Agde have been awarded the Bleu d'Europe Pavilion , an eco-award given to the port facilities and for the quality of the port water guaranteed by analyzes during the season. The season in Cap d'Agde starts in March and lasts until the end of October. At the beginning and at the end of the season, however, some of the aforementioned facilities are not yet or no longer in operation.

Village Naturiste without a campsite

Nationwide notoriety gained Cap d'Agde by 120 hectares large nudist Plant Village Naturiste in the northeast of the city. Since the tourist district of Cap d'Agde was created on the drawing board in the early 1970s, the Village Naturiste was also an idea of ​​the city of Agde. Separated from the rest of Cap d'Agdes by the port entrance of Port Ambonne, nudists will find an urban settlement complex with apartment houses in a terrace-like design that are up to five floors high. This area is divided into the building units Port Ambonne, Port Nature, Heliopolis and Heliovillage. The terraced houses by Port Nature and Heliovillage are located between the individual areas, surrounded by gardens and green spaces. There are also two hotels and a campsite in the settlement complex. The beach has a length of a good two kilometers. There are beach bars and restaurants on the beach. Sailing boats, loungers and parasols can be rented. In the center there are supply options of all kinds, including banks, post offices, medical practices, hairdressing salons, several restaurants, supermarkets, retail outlets, laundromats, and three swimming pools. Up to 40,000 residents and tourists are in the Village Naturiste during the holiday season . With 1.5 million visitors, including day visitors, it is the most popular nudist complex in the world. Later on, the nudist complex also became a holiday destination for swingers . There are sex shops and swinger clubs .