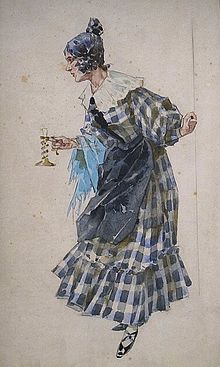 Ferrani as Mimì in La Bohème . Costume design for the world premiere by Adolfo Hohenstein (1896) 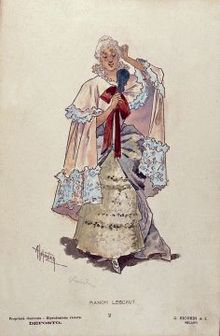 Ferrani as Manon in Manon Lescaut . Costume design for the world premiere by Adolfo Hohenstein (1893)

Cesira Zanazzio studied singing in Turin with Antonietta Fricci (1840–1912) and made her debut in 1887 as Micaëla in Georges Bizet's Carmen at the Turin Opera and in the same season as Gilda in Giuseppe Verdi's Rigoletto at the Teatro Carignano in Turin . She received engagements in various opera houses in Italy and France. In 1892 she appeared at the Teatro Carlo Felice in Genoa as Amelia in Verdi's Simon Boccanegra and under Arturo Toscanini in the title role of Alfredo Catalanis Loreley .

On February 1, 1893 Ferrani sang Manon in the world premiere of Puccini's Manon Lescaut at the Teatro Regio in Turin, her partner was Giuseppe Cremonini (1866–1903), with whom she also appeared at La Scala in Milan . She was then allowed to give the Manon at various Italian opera houses and also at the Teatro Colón in Buenos Aires . In 1894 she was involved in the Milan premiere of Alberto Franchetti's Il fior d'Alpe .

In 1895 she sang Suzel in L'amico Fritz at the Opéra de Monte-Carlo and the title role in the world premiere of Giacomo Orefices Consuelo at the Teatro Comunale di Bologna . In the presence of his composer colleagues Mascagni and Franchetti and to his great satisfaction, she designed Mimì in the world premiere of Puccini's La Bohème at her parent company in Turin in 1896 , although the audience only gave muted applause and the press was critical. Mimì prevailed and has now become her star role, also on tours in Russia and Spain. In Genoa on January 17, 1901, she sang in Pietro Mascagni's Le maschere , which premiered simultaneously in the six major opera houses in Italy. In Genoa, the performance was canceled halfway through due to the unrest in the audience, and the opera also failed in the other theaters, causing scandal.

Other famous roles of Ferrani were Juliette in Gounod's Roméo et Juliette , Marguerite in Gounod's Faust , the Fanny in the Pièce lyrique Sapho by Jules Massenet , the Charlotte in Massenet's Werther . In Wagner operas she appeared as Elisabeth in Tannhäuser and as Eva in the Meistersinger . At La Scala she sang the first Italian performance of Pelléas et Mélisande under Toscanini on April 2, 1908 , this premiere was just as unsuccessful for her as the one that followed at the Teatro Costanzi in Rome. The following year, 1909, she ended her stage career. From then on she gave singing lessons and continued to maintain her salon in Turin .