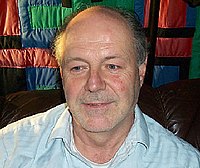 Charles H. Moore (born September 9, 1938 in McKeesport , Pennsylvania ) is the inventor of the Forth programming language and co-founder of Forth, Inc.

Moore grew up in Flint , Michigan , and was the Central High School's farewell speaker (1956). Moore came to MIT through a National Merit Scholarship and later joined the Kappa Sigma Brotherhood . He received his Bachelor of Science degree in physics in 1960 with a thesis on data reduction for the gamma-ray satellite Explorer 11 . He then went to Stanford (1961) and studied mathematics there for 2 years.

He learned Fortran II and some time later Lisp with John McCarthy for the IBM 704 , in order to use it to perform calculations for the optical monitoring of satellite orbits, for moon observation and for controlling the Baker-Nunn cameras at the Smithsonian Astrophysical Observatory (SAO) (1958). He optimized the program for determining the trajectories of satellites in assembly language . In the course of his mathematics studies at the Faculty of Computer Science at Stanford University , he learned for the Burroughs B5500 Algol and took the opportunity to optimize the control for an electron accelerator at the Stanford Linear Accelerator Center (SLAC) (1961). As Charles H. Moore and Associates , he wrote a Fortran-Algol converter for the time-sharing service Realtime Systems, Inc. (RSI) and programmed a real-time gas chromatograph on his first minicomputer (1965). For Mohasco Industries, Inc. in Amsterdam , New York , he learned Cobol on an IBM 1130 in order to program the software for the design of carpet patterns (1968).

Moore developed Forth since 1968 and built his personal software library on an IBM 1130, which was connected to the first graphics-capable terminal he had seen (IBM 2250). In the years that followed, he used Forth to control the 11-meter telescope and receiver of the National Radio Astronomy Observatory (NRAO) at Kitt Peak for a national program to observe and record millimeter waves in space (1970).

In 1973, Moore founded Forth, Inc. with Elizabeth Rather for a contribution of $ 5,000. In the following 10 years he ported Forth systems to many mini, micro and mainframe computers. He used it to program numerous applications from extensive databases to automated robot technology.

In 1980, he published a special issue in Byte magazine on "The Forth Language." Greg Williams' foreword is one of those rare impressions of people outside of the Forth world. Finally, Moore left Forth, Inc. in 1982 to focus exclusively on To devote to hardware development .

Moore intended to increase the efficiency of his programming system by implementing the Forth architecture as hardware. Among other things, he is a co-founder of Novix, Inc. and implemented (1983) the NC4000 processor in a gate array. To this end, he also developed and sold kits. A derivative of this was sold to Harris Semiconductor and marketed as the RTX2000 specifically for space applications (1988).

As a member of the DBA Computer Cowboys he designed (1985) the Chip Sh-Boom from standard components, which is still marketed. For the MuP21 he developed his own design tool (1990). The MuP21 has several specialized processors on one chip. A network interface was integrated on Moore's F21 (1993). He then founded the iTv company and designed the i21, with a similar architecture, but with significantly higher performance specifically for Internet applications (1996).

Back at the Computer Cowboys he developed colorForth, ported his VLSI design tool there as well and designed (2001) the microcomputer c18, a simple 18-bit core with stacked memory, several of which can be accommodated on a SEAforth 40C18 chip. With a few people from the last development team, Moore founded GreenArrays, Inc. in 2009, with which he designed a number of new multicomputer chips that are now based on the architecture of the F18A and thus represent a further development of the c18. With the GA144, Moore was able to accommodate the F18A 144 times in a processor for the first time. Its processors are always designed for high performance and low power consumption.