His extensive work, which focuses on the piano, is rooted in the time of the romantically understood virtuosity of Niccolò Paganini , Frédéric Chopin and Franz Liszt , whose center was Paris in the 1830s. 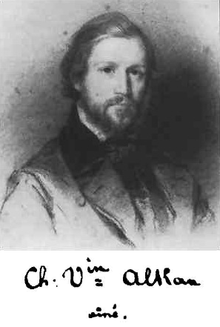 Charles Valentin Morhange was the son of the Lorraine Jewish schoolmaster and music teacher Alkan Morhange, whose first name he and his siblings took as their last name. Several of Charles Valentin Alkan's brothers have also emerged as musicians, including the pianist, composer and professor at the Paris Conservatory Napoléon Alkan (1826–1906). An illegitimate son of Alkan was Élie Miriam Delaborde (1839-1913), an outstanding pianist of his time.

At the age of six, Charles Valentin Alkan was accepted to study piano and organ at the Paris Conservatory . As the most talented student of his most important teacher and mentor Pierre Joseph Guillaume Zimmermann , he made his concert debut as a pianist at the age of twelve; Victor Dourlen taught him in the subjects of harmony and counterpoint .

As early as 1829 he held the position of répétiteur de solfège at the Conservatoire and taught there from 1831 to 1836 as professeur honoraire for solfège , but to his great disappointment did not receive the corresponding professorship, which became free in 1836.

As a young virtuoso, Alkan, along with his rivals Liszt and Sigismund Thalberg, is one of the leading pianists who fully exploited the possibilities of modern pianos and, through changes in playing technique, gained new possibilities of expression and implemented them artistically. Between 1839 and 1843 he withdrew completely from the public for unknown reasons. A symphony for large orchestra announced in 1844 and discussed in the press was neither performed nor published. Also between 1846 and 1848 Alkan hardly appeared in public and devoted his time mainly to composing and, as later, to studying the Torah and the Talmud . An Opéra comique was not published, but many of his piano works appeared in print.

It was taken for granted that Alkan would succeed Zimmermann as Professeur de Piano in his office. The fact that it did not come to this because of a political intrigue (successor was the less gifted Antoine Marmontel ) may have been one of the reasons why Alkan bitterly withdrew from the public for several years in 1848. The death of his friend Frédéric Chopin in 1849 also increased his fear of the public.

Since the mid-1840s he had given musical advice to the Jewish community in Paris and in 1851 temporarily took over the position of organist at the Jewish temple in Paris. He contributed little to religious Jewish music, although he revealed to his friend Ferdinand Hiller that the entire Torah should be set to music in a "second life". The organ works of Johann Sebastian Bach and Felix Mendelssohn Bartholdy gave him more inspiration . However, he rarely composed exclusively for the organ, but mainly for the pedal piano , as the playing instructions in these works show.

Only in later years did he turn to smaller groups of the public. Between 1873 and 1880 he aimed for cycles of six petits concerts de musique classique . Between 1873 and 1875 there were six concerts each. They were omitted in 1876 and 1879, four concerts in 1878 and three in 1880. In the programs, Alkan mostly played alone in a colorful mixture works of the German, Italian and French Baroque, the period of the Viennese Classic (including the late Beethoven sonatas) and the Romantic period up to his contemporaries of about the same age as Chopin and F. Mendelssohn Bartholdy as well as from and to also own works. After that, Alkan withdrew almost entirely. Even after 1882 he did not carry on the long correspondence with Ferdinand Hiller.

Alkan died in almost complete oblivion in 1888 and found his final resting place on the Cimetière de Montmartre (Division 3). Only rumors are known about the circumstances of his death; in the formation of musical legends, for example, he was killed by a falling bookshelf. An obituary in the magazine Le Ménestrel macabre stated that the news of his death made it known that he still existed.

Alkan's works, mostly piano compositions, remained relatively unknown during his lifetime. Robert Schumann's 1837 negative review of the Trois morceaux, op. 15, prevented an unprejudiced reception in the German-speaking world, although a little later Schumann had acknowledged Alkan as an "ultra of the French romantics" . Alkan's works have only experienced a renaissance in the last few years.

Alkan is not inferior to his more famous contemporaries, Frédéric Chopin and Franz Liszt, in compositional mastery and the expression of an individual piano language. Some of Liszt's technical and compositional ideas were anticipated by Alkan. Many of his works are of enormous difficulty and only reserved for the virtuoso.

With his first major work, the Trois Grandes Études, op. 76 (1838), Alkan crossed the line from a technical masterpiece to an étude as an art form. The first etude is written for the left hand alone, the second for the right hand alone, and the third “reunited” for both hands. The latter is a clear anticipation of the Unison final movement from Chopin's B flat minor Sonata .

Another innovation is the programmatic Grande Sonate ('Quatres-ages'), op. 33 (1844), with which Alkan's mature style is manifested. Each of the four sentences stands for an age. The second movement deals with the third decade of a person's life in the form of a Faust scene. Even before Liszt's Sonata in B minor (1853), the thematic realization of the characters by means of an Idée fixe can be found here , which also amounts to opening up symphonic ideas for the piano. Both are later associated with Liszt rather than alkane.

The metaphysical dimension of virtuosity , which at the time was not understood as derogatory , is by no means only revealed in Liszt's Études d'exécution transcendante , but hardly more clearly and exemplarily than in Alkan's Douze Etudes dans les tons mineurs, op.39 (12 etudes in all minor keys) from 1857. This cycle is a unique metacycle of twelve concert studies, some of which are grouped internally. Three of the etudes are combined to form a concert pour piano , the first movement of which alone has a playing time of 30 minutes, and four others form a symphony pour piano . The last Etude ( Le Festin d'Aesope , also Le Festin d'Ésope ) is an independent cycle of variations , the individual variations of which - except for the last - remain close to the eight-bar theme and are similarly systematic as the Paganini Variations by Franz Liszt ( Grandes Etudes de Paganini No. 6, 1839/1851) and Johannes Brahms (op. 35, 1866) deal with typical pianistic problems.

But his work also includes smaller pieces. 49 of these are summarized in the Esquisses op. 63 cycle published in 1861 . Each of the 24 major and minor keys is represented by two pieces. The Esquisses are reminiscent of Chopin's 24 Preludes, Op. 28 , with their sometimes succinct brevity and their alternation between seemingly naive simplicity and refined virtuosity, and go beyond what was customary at the time with harmonic daring.

The chamber music works (a piano trio, the Sonata de concert for piano and violoncello and the Grand Duo concertant for piano and violin) and the two preserved, remarkably concise Concerti da Camera of only a few minutes should not go unmentioned .

The enormous technical difficulties and the sometimes enormous scope of his works prevented them from spreading right from the start. Nevertheless, there is a line of pianistic tradition that has never completely let his works be forgotten: after Anton Rubinstein and Ferruccio Busoni and his students Egon Petri and John Ogdon , Ronald Smith and Raymond Lewenthal in particular have taken on his works in recent decades . Today Marc-André Hamelin , Vincenzo Maltempo , Jack Gibbons and Stéphanie Elbaz are the best-known alkane interpreters among the great pianists. Thanks to Hamelin's commitment in cooperation with the Alkan societies in England and France, a growing number of pianists are once again adding Alkan to their repertoire.

Works for piano and orchestra