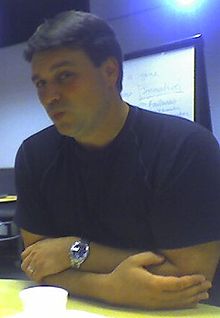 Chris Taylor (* in British Columbia ) is a Canadian developer of computer games and founder of Gas Powered Games . He is best known for his participation in Total Annihilation and the Dungeon Siege series. In 2002 he reached number 30 on the GameSpy list of "Most Influential People in Gaming" .

Taylor began his career in the computer game industry in the late 1980s with Distinctive Software in Burnaby , British Columbia. His first game, Hardball II , was released in 1989 and won the Software Publishers Association Award for best sports game of the year. Taylor's other titles include 4D Boxing and Triple Play Baseball .

Taylor moved to Seattle , Washington , USA in January 1996 . After starting at Cavedog Entertainment , he became a project manager and designer for Total Annihilation , one of the first three-dimensional real-time strategy games (RTS), which received many awards, among others. a. "The Greatest Games of All Time," GameSpot. He was also involved in the first add-on Die Core Offensive for Total Annihilation.

In May 1998 he founded the Gas Powered Games studio in Kirkland , Washington, which completed the action role-playing game Dungeon Siege in 2002 and published it through Microsoft Game Studios . A year later, the add-on Legends of Aranna was released , which, however, was developed by Mad Doc Software . The successor Dungeon Siege II was released in 2005, followed by the add-on Broken World in 2006 .

In August 2005, it was announced that Gas Powered Games was working on Supreme Commander . It is the first RTS under Taylor's leadership since 1997 and is considered the unofficial successor to Total Annihilation . Since Atari owns the rights to the Total Annihilation brand , no official reference can be made. Supreme Commander was named "Best RTS of E3 2006" and received the GameCritics Best Strategy Game Award . The publication took place on February 16, 2007. In November 2007, the standalone add-on Forged Alliance followed .

After Supreme Commander an action RPG was developed again. It goes by the name of Space Siege and takes place in space . The game is supposed to put the player before moral decisions and offer a dense story. It was released on August 22, 2008, but received rather average ratings.

Demigod was Chris Taylor's next project with his team at Gas Powered Games, a DotA -like real-time strategy role-playing game that was released in April 2009.

On November 12, 2008, the collaboration between Gas Powered Games and Square Enix ( Final Fantasy , Dragon Quest ) for the development of Supreme Commander 2 was announced, which was released in March 2010. The company then worked on Age of Empires Online under Taylor's direction .

On January 14, 2013, Taylor and Gas Powered Games launched a Kickstarter campaign for the real-time strategy / action-RPG hybrid title Wildman . At the same time it became known that Gas Powered Games was in serious financial problems and that if the financing fails, it is threatened with extinction. Shortly before the end of the funding campaign, on the night of February 11th to 12th, 2013, Taylor announced the premature end of the Kickstarter campaign for Wildman . The set target of 1.1 million US dollars has only been half achieved by then. A little later it became known that the Belarusian developer Wargaming.net ( World of Tanks ) would take over Gas Powered Games.