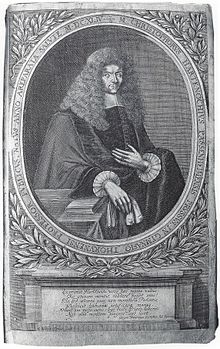 Christoph Hartknoch (* 1644 in Jablonken , Duchy of Prussia , † 1687 in Thorn ) was a Prussian historian , cartographer and engraver .

Christoph Hartknoch from Passenheim (Polish: Pasym ) was born in the East Prussian district of Ortelsburg . Hartknoch, son of Stephan Hartknoch from Lyck (Ełk) , moved to Passenheim with his family in 1650. There he experienced the brutality and horror of the Tatar attacks (see Mongol Storm ) on southern East Prussia. His teacher saved his life by shoving him out the window. Many people were killed and places destroyed, but the Hartknochs managed to escape to Königsberg .

In Königsberg he began to learn theology at a Protestant institute. Soon after, his parents died and he had to find work. He became a private teacher in Kaunas and then principal at the evangelical school in Vilnius . He soon went back to Koenigsberg, where he began to be interested in history by reading books and documents. 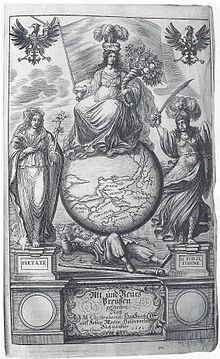 In 1679 he wrote a book on Prussian history, first in Latin, then also in German, Old and New Prussia , as well as a Prussian church history ( Kirchen-Historia ). The works contain descriptions and illustrations of the Prussian people, their history and culture and also copper engravings from cities in Prussia, for example the city of Thorn (Toruń) , where Hartknoch last lived and taught at the grammar school. He received ethnographic material mainly from Matthäus Praetorius .

Through his work in Kaunas and Vilnius , Lithuania , he was also interested in their history. He then wrote the first detailed history of the Lithuanian-Polish alliance.

The city of Thorn in Prussia was almost entirely Protestant at the time. In 1677 Hartknoch was invited to become director of the Thorner Gymnasium . He accepted and worked there for ten years. Due to the difficult living conditions, Tatar attacks and the resulting poverty, Hartknoch's body gave up at the age of 43. He died in Thorn in 1687 and was buried there.

His extensive scientific work contributed a lot to the knowledge of Prussia, Pomerania, Samogitia, Courland (Couronia) and Poland.

In his book Old and New Prussia , he also published an illustration by Nicolaus Copernicus , who came from Thorn. Old and New Prussia , as well as the Prussian Church History, wrote Hartknoch towards the end of his life and while he was the director of the Thorner Gymnasium. In the book he apologizes for the fact that he is busy working on the edition of the book because he can tell from his body that he will soon be finished. He died a year later at the age of 43.